Produced by Jazz Boon (文偉鴻), Invisible Team <隱形戰隊> has been filming for three months, and is set to be completed by December for a 2022 release. The TVB drama stars Kenneth Ma (馬國明), Joel Chan (陳山聰), Natalie Tong (唐詩詠), Moon Lau (劉佩玥), and Tiffany Lau (劉穎鏇). Filming a scene by a hotel swimming pool, Tiffany wore a bikini that revealed her abs and also long legs while Moon wore a more conservative swimsuit and covered up her lower body.

In the scene, Tiffany and Moon’s characters are tasked with seducing several rich second generations while trying to uncover their crimes. While the ladies attempt to seduce their targets in a pool, Kenneth and Joel keep watch over their safety from afar.

As the press was invited to visit the filming set for this scene, Tiffany attracted a lot of attention in her bikini. When she walked out of the water, she revealed strong abs and slender legs. Training for more than six months, Tiffany hopes viewers can see how toned and muscular she has become as a result of her hard work. 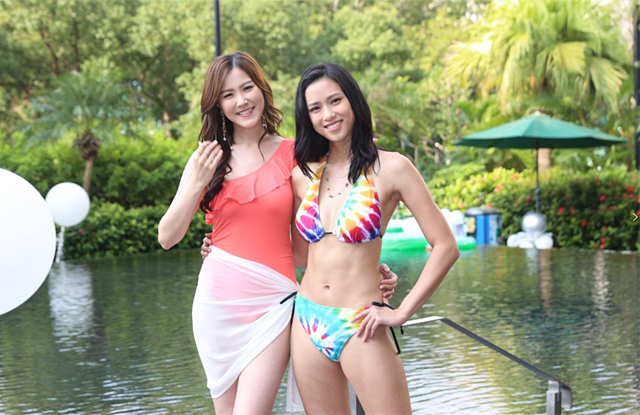 Coming to work early that day, Tiffany felt the strong winds and the lack of sun made her feel like a popsicle when she walked into the freezing water. “I stepped into the water at least 20 times already. I am so cold, that I have lost all feeling in my body. I can only feel myself shaking.”

On the other hand, Moon was teased for overeating and not training her body diligently. Although she would eat Joel and Tiffany’s leftovers during lunchtime, Moon does not usually gain a lot of weight. Moon complimented her costars for training hard, which inspired her to also exercise and become more health conscious.

In the scene, Kenneth was dressed in a colorful shirt which matched nicely with Tiffany and Moon’s bright swimsuits. Asked if he enjoyed the feeling of having two women by his side, Kenneth immediately joked that he was blind today, and he would not be commenting on their outfits. Joel teased Kenneth for being scared of upsetting his girlfriend Roxanne Tong (湯洛雯).

Although filming for the action drama has been strenuous, the cast grew really close and are delighted with their experience. Kenneth and Joel have already completed all the studio scenes, and are just wrapping up fight scenes and some outdoor shots.