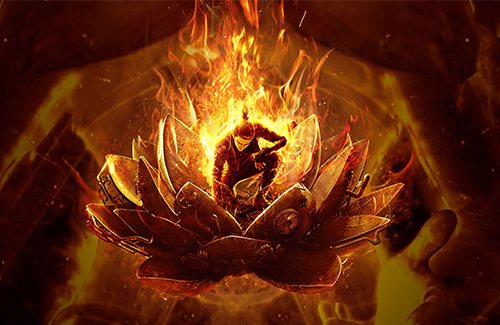 Hosted annually in France, the Annecy International Animation Film Festival (AIAFF) recently revealed a three-minute clip from Nezha Reborn <哪吒重生>, an upcoming Chinese animated film expected to premiere at the end of the year. While the three-minute clip is neither an official trailer nor a teaser, the clip does offer a glimpse of what we can expect from Chinese animation in the future.

The clip combines elements of classical eastern mythology with western punk—a motorcyclist is being chased down by blonde man in a car, but the motorcyclists outsmarts the man and hurdles him and his vehicle into a factory below. The motorcyclist then reveals himself to be the  incarnation of the deity, Nezha.

Nezha Reborn is produced by the team behind last year’s White Snake <白蛇：缘起>, which grossed over 400 million yuan in China. While the film’s story was noted to be just average, the animation and visual style earned critical acclaim. Like White Snake, Nezha Reborn will continue to the journey of bringing Chinese folk legends into animation, but with added elements of punk, art deco, and other western styles.

Nezha Reborn is expected to premiere sometime in 2020.