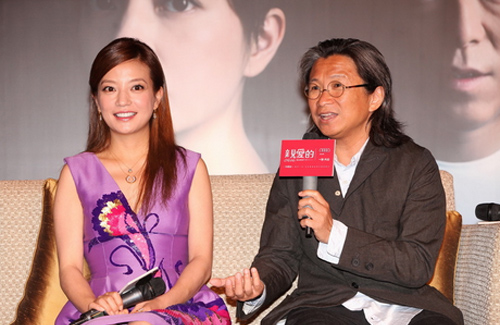 Vicki Zhao’s (趙薇) latest movie Dearest <親愛的> premiered in Beijing today and will be released in nationwide theaters in China on September 25. Although Vicki was at the press conference to promote her new movie, the media pestered Vicki about good friend Faye Wong’s (王菲) reconciliation with ex-boyfriend Nicholas Tse (謝霆鋒) instead.

Vicki Denies Helping the Couple Get Back Together

Because Vicki and Faye are close friends, it was speculated that Vicki helped Faye and Nicholas get back together. Firmly denying that she was the matchmaker, Vicki said she only found out about their relationship from reading the news on the Internet.

When Vicki was a guest on Nicholas’ food travelogue program, Chef Nic <十二道鋒味>, she told Nicholas, “It looks like someone didn’t love the wrong person.” Immediately, the media began speculating that Vicki referred to Faye in the statement. At the press conference today, Vicki explained, “I was not talking about Faye on Chef Nic. If I knew that they were together, I would never make jokes about them on a television program.”

Although insisting that she did not know about the couple’s reconciliation beforehand, Vicki defended Faye. She added, “Faye is an adult and she’s older than me. I can’t think or do things for her. I respect her decision.”

Shifting the focus to her film Dearest, Vicki revealed that she portrays a widowed villager for the very first time. Director Peter Chan‘s (陳可辛) film touches on the topic of abducted children in China’s rural villages. Despite the challenges in filming, Vicki is very thankful for the role, which she felt is a good fit for her.

Dearest also stars Lei Hao (郝蕾) and Huang Bo (黃渤) as a couple whose marriage deteriorates after a miscarriage.