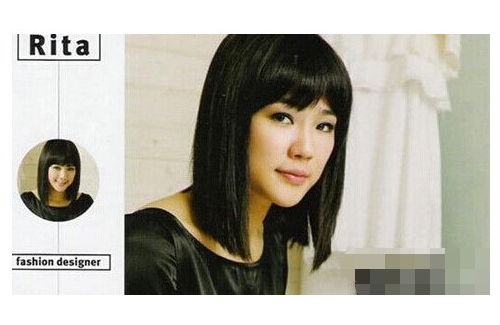 For years, Wallace Chung (鍾漢良) was trailed with rumors about his marital status, but a single trip to Wallace’s filming grounds in Thailand has revealed it all—not only is the 41-year-old married, he also has a daughter.

But Wallace’s wife, Rita Hsieh (謝易樺), is more than what meets the eye. The Taipei native, born in 1980, dreamed to be a performer. She tried to audition for the Taipei National University of the Arts when she was 18 years old, but her father turned her down. Through the recommendation of a friend, she eventually went into apparel designing, and after two years in the industry, she quit her job to study at the Fashion Institute of Technology (FIT) in New York.

However, Rita never graduated from FIT. Although she worked part-time at school, Rita struggled to pay her tuition and had no choice but to drop out after only one year into her studies. She returned to Taiwan, where she continued to pursue a career in apparel and fashion designing. In 2007, she and her friend established the “Empress6” brand.

Through the years, Rita has worked under many famous celebrity stylists and designers, including Lee Ta-chi (李大齊) and Timmy Yip (葉錦添). She has also worked as a commercial stylist for Jolin Tsai (蔡依林), Zhang Ziyi (章子怡), Takeshi Kaneshiro (金城武), and more. In 2009, Rita was featured in a Taiwanese women’s magazine, where she talked about her early struggles in the fashion and design industry. She was only 29 years old when she did the feature. Known for being a prodigy in the industry, Rita reportedly earns about $10 million RMB a year through her business.

According to Taiwanese media reports, Wallace and Rita have been together for many years. They married sometime in 2012 and purchased a house in the Xinyi District of Taipei. They soon had their daughter. Rumors say that Rita did not want to impede Wallace’s career because of their marriage, thus, she chose to stay mum about their relationship. Through the years, Rita worked as Wallace’s stylist; she was one of the main style directors for Wallace’s 2010 album, All Eyes On Me <視覺動物>.

2 comments to Wallace Chung’s Wife is a Millionaire Designer