The elder sister of Tavia Yeung (楊茜堯), 44-year-old TVB actress Griselda Yeung (楊卓娜) won netizen praise lately for her on-point portrayal of an obnoxious stepmother in The Beauty of War <美麗戰場>, a departure from her usual sympathetic characters.

Emotionally Shaken by Rumors During Pageant 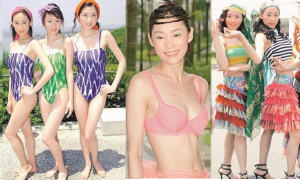 A 2001 Miss Hong Kong pageant contestant, Griselda was one of the hot favorites of the year along with Shirley Yeung (楊思琦). Reflecting on how she failed to place in the end, Griselda recounted, “I took part that year only because I did not want to take the standard route, since young, I had zero confidence, and would get scared and run away whenever I met with problems,”
That year, rumors of fighting amongst the candidates emerged when they went on location to Japan and Korea. Ill-prepared for the limelight, media reports focusing heavily on Griselda thwarted her already lacking confidence. The Japanese media had featured the 3 top favorites that year, and Griselda had accidentally elbowed Shirley during the photoshoot– leading to reports calling out her alleged bitchiness.

“I was unable to deal with it, and was unhappy even after that when we went to Korea, it was freezing and we had to put on bikinis, I wanted to just hide at a corner, and they then painted me as a loner,” Traumatized by the darkness of the showbiz industry, she even contemplated dropping out of the pageant and said her loss was unsurprising given her total lack of confidence. Ironically, Griselda says she had always been on friendly terms with Shirley, whom she remains in contact with up till this day.

Wasted 10 Years Until Sis Tavia Intervened
Apprehensive of getting scolded on set, the actress avoided the drama route and took up hosting gigs at TVB8 instead for the next ten years. It was only in year 2010 when her sister Tavia recommended her to screenwriter Miu Siu-ching (梅小青) that she finally resumed acting in the drama Can’t Buy Me Love <公主嫁到>.

Guilty about being unable to support her parents financially, Griselda thanks Tavia for shouldering the family’s expenses all those years. She recounts while tearing up, “You’re right! I always run away from problems…but I felt really guilty as (my dad) left before I had the means to support him. So, my goal now is to work hard, earn more…I hope that one day I’ve the ability to take care of (mom),” 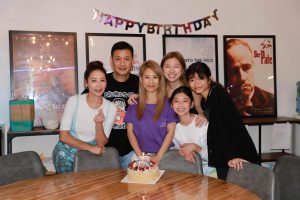 A stepmother in real life as in reel life, Griselda also has a daughter with Yeung Chi Kiu (楊志翹). Recalling how she had rejected his advances at first, Griselda said, “His two daughters had been among my first students when I was teaching handicrafts. Initially when he courted me, I rejected him countless times, as I was afraid of the complications…first is his ex-wife had passed away and had two daughters, I had no idea how to be a stepmom, another reason was that I had a boyfriend of 11 years with no feelings. For one year plus we deliberated until he wanted to give up and go back to being friends, that I finally saw how he was my soul mate,”

Asked how she gained the acceptance of her two stepdaughters, with whom she now shares a friendship-like closeness, the veteran actress said that she did not request them to address her as “mommy” right from the start, and was glad that her silent contributions to the family had been felt by them. In fact, it was the two girls who told their father they wanted to stop calling her “Miss Yeung”, and use “mommy” instead!

Unbelievably, Griselda has yet to finalise marriage procedures with Yeung Chi Kiu, who has actually proposed to her countless times. She hopes that he can attempt a romantic proposal once more, to make it an unforgettable memory for her!