Originally planning to let fans know about a script for an upcoming drama, director Yu Zheng (于正) absentmindedly made a post on Weibo that fueled up an old rumor of Chen Xiao (陳曉) and Zanilia Zhao (趙麗穎) dating back in 2013.

Although Yu Zheng was quick to notice the mistake and deleted it mere seconds after publishing, many netizens took screenshots of his post. The leak towards Zanilia and Chen Xiao’s breakup eventually became the overall number one search result on Weibo.

In his original post, Yu Zheng wrote, “I’m in the middle of writing a script for a modern series and it’s based on a real story. One of the storylines is called ‘Fate’. A man and a woman connect after leading a drama, and they develop feelings for each other during the process. The woman loved the man so much that he began feeling suffocated. The woman became more and more popular, and despite the man wanting to prove himself as well, he only stayed at the same level. In the end, they broke up. Years later, both the man and the woman have started their own families. But one day, the man was drunk and confessed to his friends that he had always loved this woman, but he was too young and immature back then.” 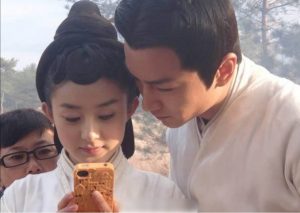 While no names were given in Yu Zheng’s post, sharp fans immediately made the connection and believed that he was talking about Chen Xiao and Zanilia, who had worked on Legend of Lu Zhen <陸貞傳奇> in 2013. Although it’s been years since the rumors came up again, many people remembered that Chen Xiao and Zanilia had appeared enthralled with each other even off cameras.

Causing a commotion on Weibo, Yu Zheng made a second post a day later and clarified that he only wanted to introduce new actress Zhang Nan (張南). He wrote, “There’s nothing! Nothing! Just let this slide! I didn’t even think about these two people when I was writing the post. All I wanted to do was introduce Zhang Nan, but I saw that the comments were getting out of hand! I realized the awfulness, and knew people were going to start searching about it so I quickly deleted it. Despite this, people still searched for it. I’m really sorry if this brought unnecessary discomfort, but you can’t blame me. I didn’t even think much about it. You guys have wild imaginations.”