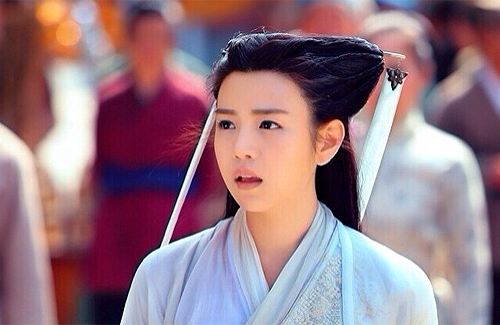 Yu Zheng‘s (于正) new drama, The Romance of the Condor Heroes <神鵰俠侶> has been fiercely criticized for its departure from Louis Cha‘s (金庸) classic wuxia novel.

In particular, an unorthodox spin has been put on the two protagonists – Yang Guo, an earnest and steadfast character in the book, is depicted as cheeky and flirtatious, while Little Dragon Girl, who is meant to be cold and aloof, becomes bubbly and cutesy. Many fans found this unacceptable, and have singled out Michelle Chen (陳妍希) as being fundamentally unsuitable for her role as Little Dragon Girl. Michelle has been a perpetual target of vitriol for the past few months. In a recent interview, she defends the production and expresses confidence in her appearance.

Michelle Did Not Expect to Land Role of Little Dragon Girl

Michelle admits that she is a big fan of Louis Cha, owning his entire collection of novels and often re-reading his books. “My favorite novel was actually The Legend of the Condor Heroes and I always wanted to play to the role of Huang Rong. I never even dreamed that I would star as Little Dragon Girl, someone with such ethereal beauty. But I gradually came to fall in love with this role, and the current adaptation in particular.”

On the subject of her girl-next-door appearance being incongruous with Little Dragon Girl’s stunning, ethereal beauty, Michelle remained calm. She said, “I have seen all the criticism and most of it is tongue-in-cheek. Many of the critics nicknamed me xiao long bao (soup dumpling), and I don’t really mind, as xiao long bao is pretty good. It is yummy and cute.” Michelle added that the controversy is a good thing, as it shows that people are watching the show and thus have an opportunity to fall in love with it.

Much of the criticism was aimed at Michelle’s weight, especially her chubby cheeks. Michelle admitted that it was slightly frustrating as her body naturally has high water retention, giving her a chubby appearance. She revealed that she went on a strict diet to reduce her sodium intake and jogged every day to slim down her appearance.

Despite the criticism on her looks, Michelle will not consider cosmetic surgery, although it is commonplace for many actresses seeking to look perfect on camera.

Michelle asserts that The Romance of the Condor Heroes has made the relationship between Little Dragon Girl and Yang Guo more interesting, without diluting the wuxia spirit of the original novel.  A particular scene where Little Dragon Girl requested Yang Guo to “think of her 600 times a day”, has been criticized as being excessively cheesy. Michelle said, “These scenes are necessary to show how love blossomed between two people who spent a long time together underground. These interactions between them make their relationship more believable.”

Michelle added that her biggest takeaway from the production was the opportunity to experience love on an epic scale, “Playing Little Dragon Girl allowed me to experience a type of love that cannot be found in reality. Yang Guo is a man adored by many, yet he only has eyes for me, and he loves me with undying fervor. This is the kind of love I can only dream about.”

Wishes to Break out of Her Mold

Since her breakout role as a pretty and innocent student in the 2012 film You Are The Apple of My Eye <那些年，我们一起追过的女孩>, Michelle has been typecast as a sweet, girl-next-door actress. Michelle said being typecast was frustrating, “I really want to break out of this mold, which is why I have been taking different roles. It is important for me, as an actress, to have variety and never stop trying new things. Take my role as Little Dragon Girl, for instance. Regardless of whether I succeed or fail in playing this role, I will keep learning and consolidating what I have learned, to prepare for future challenges.”