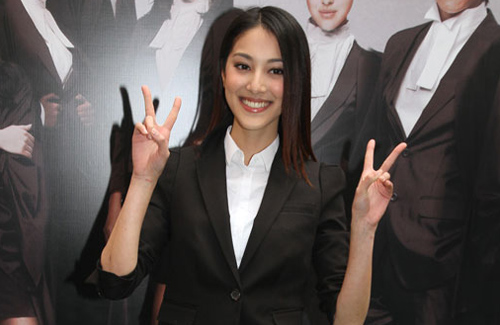 The cast of upcoming TVB legal drama, Raising the Bar <四個女仔三個Bar>, attended a promotional function on a high school campus yesterday. Since crowned the winner of Miss Hong Kong 2013, 23-year-old Grace Chan (陳凱琳) has been heavily promoted by TVB. In the drama, Grace portrays an apprentice lawyer trainee.

Due to the difficult legal jargon in the script, Grace expressed admiration for veteran actors Ben Wong (黃智賢) and Timothy Cheng (鄭子誠) in their ability to deliver the lines. “Ben is a lawyer, so he delivers the most lines. We sit in the back to take notes. Sometimes when we film late into the night, it is even more tiring. But Ben and Timothy recite their lines very sharply. They are both clear and concise. I definitely need to learn from my seniors.”

At the promotional event, Elaine Yiu (姚子羚) was a favorite among the crowd of students, who surrounded her and requested for photos. Due to the nostalgic high school campus, Elaine reminisced her school days and shared that she and Amigo Chui (崔建邦) attended the same high school and were also on the same track.

Given Amigo’s plentiful romantic rumors, Elaine was asked whether Amigo has always been a playboy. “No, but he has always possessed verbal eloquence and was good at composition.” When probed as to whether Amigo had pursued her romantically, Elaine smiled, “You’ll have to ask him. I don’t know if he’s pursued me before.”

Shifting the focus back to the drama, Elaine revealed that will portray Ben’s wife, but she will also have a romantic storyline with Sam Tsang (曾航生). As Sam gave his first onscreen kiss to her, Elaine had to ask Sam to relax when his hands shook and he sweated profusely in anxiety.