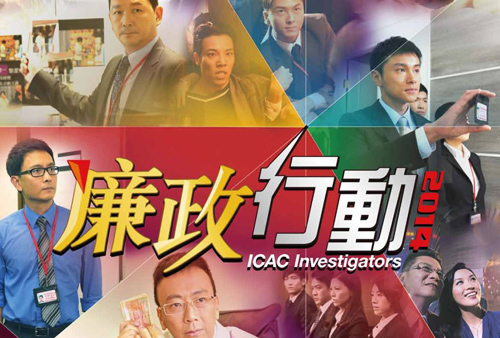 Featuring some of Hong Kong’s most popular and acclaimed television actors, the ICAC-produced ICAC Investigators 2014 <廉政行動2014> is slated to hold its premiere event at the Grand Theater in the Hong Kong Cultural Center on March 26, 2014, one week ahead of its official television airing date on Saturday, April 5.

It is the tenth installment of the ICAC Investigator series and the fifteenth crime drama produced by Hong Kong’s Independent Commission Against Corruption (ICAC) department, which was established by the Hong Kong government exactly forty years ago. The ICAC’s primary aim is to wipe out corruption among the Hong Kong government through law enforcement, prevention, and community education.

Each criminal case presented in the episodes is based on true events documented and investigated by the ICAC. The first episode – titled Comrade <戰友> – is based on a corruption case that occurred in Hong Kong’s public sector. The second episode, Spider <蜘蛛>, centers on a corruption case that happened in the architecture industry. The third case, Crazy for Wealth <財迷>, involves the investigation of a corruption and cheating scandal from a public company. Episode four Black Ball <黑球> will focus on a group of Hong Kong youths and their involvement in a rigged sports game. The final episode, Tomorrow <明日>, will deal with one of the Hong Kong public’s biggest concerns – the shortage of milk formula.

ICAC Investigators will air on  Saturday, April 5, 2014 on the TVB Jade channel.