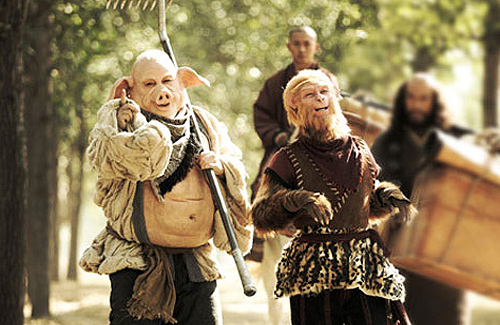 Controversial Mainland epic Journey To The West <西遊記> has finally redeemed itself just days before its series finale. Last week, the fantasy drama logged an average of 23 ratings points and peaked at 26, achieving its highest viewership figure since its TVB debut in April.

Suffering from low ratings during the first quarter of the year, TVB made a sudden decision to air Journey To The West, which was first broadcast in China in 2011, during its golden 8:30 p.m. time slot in order to raise the numbers. Unluckily, viewers blasted the show after its first day and filed hundreds of complaints with both TVB and Hong Kong’s Communications Authority over the drama’s poor production value and asked for the show to be taken off the air. Despite the uproar, TVB continued to keep Journey in its prime time line up though edited the lengthy 66 episodes down to just 45 episodes as a compromise.

Happy that the company’s decision has finally paid off, TVB executive Tsang Sing Ming (曾醒明) said on June 23 that his company was confident that the timeless Chinese classic will appeal to all demographics. He also backed up this point by acknowledging viewers who have praised the show. “The ratings this time proves that TVB has made the right choice. There are even viewers who emailed upper management just to say that Journey is a good show!”

TAGS: Journey to the West