TVB to Air “The Ultimate Addiction” to Boost Viewership Ratings 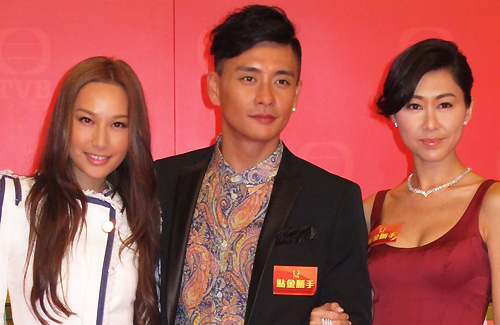 When TVB aired Mainland production Journey to the West <西遊記> in the prime-time 8:30 p.m. time slot on April 28, angry viewers demanded the show to be terminated. In hopes to save the terrible reception, TVB has decided to air The Ultimate Addiction <點金勝手> starring Kate Tsui (徐子珊) and Bosco Wong (黃宗澤) in the 9:30 p.m. time slot, after Never Dance Alone <女人俱樂部> completes its run.

Although Journey to the West averaged 25 viewership points on its first day of broadcast, ratings plunged to all-time low of 19 points by April 30. The first week of broadcast ended its run with an average of 22 ratings points.

As of yesterday, Journey to the West has already received 1100 complaints, making it the most condemned show in recent years. Viewers heavily criticized the Mainland production for its poor special effects and the characters’ vulgar makeup. They claimed the computer graphics were unconvincing and the monsters were hideous and scary.

In response to the heavy criticism, TVB reportedly held an urgent meeting to discuss upcoming plans. TVB initially decided to air Journey to the West due to low ratings and poor feedback over Hong Kong dramas in recent months, hoping the Mainland production would be a fresh taste for viewers. Despite loads of complaints, TVB decided to continue airing the 50-episode drama. Deputy Director of Corporate Communications, Tsang Sing Ming (曾醒明), claimed the low ratings were likely due to an overlap with the recent horse racing events. TVB believes that with greater promotion of Journey to the West, more viewers will tune in. They will soon be recruiting artistes including Wayne Lai (黎耀祥), Evergreen Mak (麥長青), and Samantha Ko (高海寧) to promote the show.

The despised Journey to the West has also taken a toll on viewership ratings for the currently broadcast Never Dance Alone, which airs afterwards at 9:30 p.m. To attract more viewers and hopefully recover from the dropped ratings, TVB will air Kate Tsui and Bosco Wong’s The Ultimate Addiction on June 2, after Never Dance Alone completes its broadcast. The Ultimate Addiction features a tantalizing plot in which Kate Tsui pretends to be a lesbian in order to avenge her father’s death by approaching Bosco Wong.

In addition, Myolie Wu (胡杏兒) and Ron Ng’s (吳卓羲) Lady Sour <醋娘子> is said to replace Journey to the West after its run, since comedies have been well-received in the past.

TAGS: Journey to the West, The Ultimate Addiction