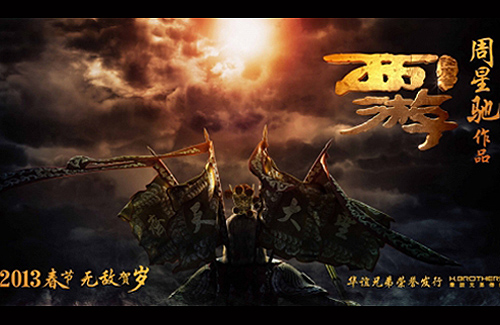 After a 4-year hiatus since his last major film, CJ 7 <長江七號>, Stephen Chow (周星馳) fans can rejoice the release of Journey to the West <西遊降魔篇>, premiering just in time to ring in the Lunar New Year in 2013.

While the production of Journey to the West this past year has been extremely secretive and kept under wraps, audiences were delightfully treated to a 60-second trailer featuring Shu Qi (舒淇) and Bo Wong (黃渤) in eccentric costumes while fans were anxious to find out what character the comedy king himself would be portraying.

Stephen, always very particular about his films, has carefully conceptualized the film to great detail – whether it be the script, special effects and selection of characters. The trailer revealed that the film will center around the monkey king in the usual Stephen Chow comedic fashion, bringing audiences a fresh approach at the classic Journey to the West story line and cinematography.

With the quirky script and over-the-top costumes, fans can be assured that they will be able to enjoy the laughs that Stephen has brought to the big screen in his past movies such as A Chinese Odyssey <大話西遊>, King of Comedy <喜劇之王> and Kung Fu <功夫>in addition to the touching and emotional story line that always tugs at a few heartstrings.

There is no doubt that Journey to the West will be one of the most highly anticipated films of 2013.

“Journey to the West” Teaser Trailer