Stephen Chow (周星馳) has always been low-profile about his romantic life. With recent talk of  romantic links with 17-year-old eliminated Miss Hong Kong 2021 contestant Ukei Cheung (張曉祺) making the headlines, the 59-year-old quickly shot down the rumors and issued a lawyer’s letter to Ukei. Saying “someone has violated the confidentiality agreement,” he also requested the photos taken at sea be deleted or further legal action shall be taken.

Yacht Party Participants Had Agreed to Rules…?
According to reports, the press snapped photos of Stephen heading out to sea with Ukei and two other female friends, and the entire group returned to shore only at 10 p.m. Stephen and Ukei then appeared again at the harbor the next day for a date out at sea. After the news went public, Stephen’s assistant denied the gossip on his behalf, adding that Ukei and the star were “not close at all.”

Sources added that the two had taken many precautions on their secret date, such as Stephen insisting on only making calls using WeChat to avoid leaving his call history behind, while requesting that any photo or video recordings made should not have his voice or presence captured. 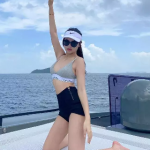 Netizens React with Aghast
According to reports, Stephen’s concern that “someone is using the opportunity to self-promote” led him to issue a lawyer’s letter to Ukei. The letter pointed out he had explicitly mentioned that no photography or videography of any kind was allowed prior to the yacht meeting, and this was agreed upon by Ukei and the other participants. However, many of Ukei’s selfies taken on the yacht surfaced along with scandalous rumors last month, leading him to suspect that “someone had violated the confidentiality agreement,” which he termed “lowly behavior.”

Netizens were mostly aghast at Stephen’s follow-up move, and questioned the need for a confidentiality agreement on the outing in the first place, with many wondering what kind of outing it was exactly. Some even brought up disgraced star Kris Wu (吳亦凡) , who also forbade the taking of photos, and commented, “please don’t take down Stephen Chow’s films and series as well!”

Gabriel Wong was a memorable sidekick in Stephen Chow’s comedies. In a recent interview, Gabriel opened up about his family’s battle with his son’s life-threatening disease.