Once a supporting favorite in Stephen Chow’s (周星馳) old comedy films, 54-year-old Gabriel Wong (黃一山) has been absent from Hong Kong productions for quite some time now. Speaking with the press, Gabriel shared that he has been working in Mainland China for 16 years. Gabriel is also a father facing one of life’s most difficult challenges: taking care of a son who has a life-threatening disease.

Many remembered Gabriel’s goofy side-kick roles in TVB dramas and Hong Kong films in the 1990s. After graduating from The Chinese University of Hong Kong (CUHK), Gabriel joined a scriptwriting training class at TVB in 1987. Remembering the perks of always running into big stars at the station, Gabriel revealed that he became an actor himself by chance, “TVB loves giving out non-paid walk-on roles. I was asked to do these cameos in The Funny Half Show <笑星救地球> for a few minutes, in which my head would get slapped by other actors.” Although he had very few lines, viewers adored his cute appearance and laughed at his antics. Filming offers quickly followed and Gabriel starred in many TVB dramas and Hong Kong films. 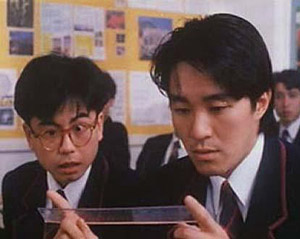 Gabriel starred in some of Stephen Chow’s biggest comedies in the 1990s: Fight Back to School <逃學威龍>, Hail the Judge <九品芝麻官>, and Love on Delivery <破壞之王>. His comedic timing is spot on, and Gabriel played memorable sidekicks opposite Stephen.

“I minored in psychology. If you realize one’s thinking, it’s easier to make friends. That’s why I have a lot of friends in the industry. I remember that Mr. Chow didn’t really like people trying to get close to him. His self-protective instincts were very strong, so I didn’t really bother him back then.” Gabriel joked that at least Stephen never scolded him on set before and they were able to maintain a cordial working relationship.

But after their four-year relationship ended, Gabriel and Stephen did not stay in touch. They ran into each other once recently, in which they greeted each other politely. Stephen even joked that if Gabriel needs him in a cameo in his productions, he would be available. Although he never took up on the offer, Gabriel smiled at the memory.

With the changing politics at TVB, Gabriel’s contract was not renewed. After briefly working at i-Cable, he was again let go. Facing no work, Gabriel felt immense pressure. “In 2003, SARS broke out. My contract was not renewed and my second son was only three years old. I felt desperate and wondered if there was really nothing for me. Fortunately, someone referred me to film Kung Fu Soccer <功夫足球> in Guangzhou.” Gabriel grabbed onto the opportunity immediately, and started working in the Mainland market.

Due to his sense of humor, Gabriel was in high demand to perform at night venues, appearing in as many as 80 shows a year. “Night venues are a great source of income. Although some places may be a bit risky, but once you get used to it, it’s easy. If an artiste can handle a night venue show, then everything else is easy. At the time, I learned how to improvise, improve my singing skills, and become less afraid. I find a lot of things to be easier now. As with many things, if you’re willing to go out there, you’ve already reached success halfway.”

Taking Care of His Ill Son is a Blessing 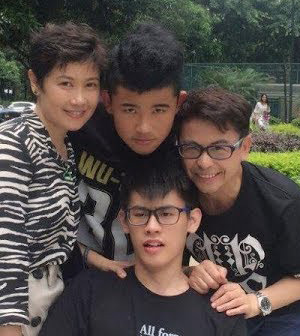 Married since 1995, Gabriel’s older son is 22 years old and younger son is 17 years old. Although they make a striking family, the Wongs have been battling with their older son’s life.

Gabriel’s older son has a rare degenerative disease, which made him wheelchair-bound. Besides immobility, in some worse cases, this disease can render the patient blind or could result in death.

Since his older son is ill, he will only experience family love in his life. Gabriel hopes that his second son will be able to experience both family and romantic love, and have a complete life.

“I only regret fatherhood because my son is suffering now,” Gabriel said helplessly.

Aside from the expensive medical bills, Gabriel did not complain once about having to take care of his older son. Gabriel said, “I believe that being able to take care of another person is a blessing. In about 8 to 10 years, I don’t even know if I’ll still be alive. If my son ends up leaving me then, I guess that will be a good ending for us – we’ll both say goodbye together and have each other in the end.”

Remaining positive, Gabriel gave his life a score of 9 out of 10. He sighed, “If not for my son’s sickness, then it would be a definite 10. I don’t really have a high standard – my only wish is to live happily and be able to drink soda every day. What more can you wish for in life?”