After much anticipation, Stephen Chow’s (周星馳) New King of Comedy <新喜劇之王> will finally arrive in theaters on Lunar New Year Day. An unofficial remake of the classic King of Comedy <喜劇之王> from 1999, the new movie will feature an all new cast consisting of Mainland Chinese actors Wang Baoqiang (王宝强) and E Jingwen (鄂靖文) and will not follow the direct storyline of the original. 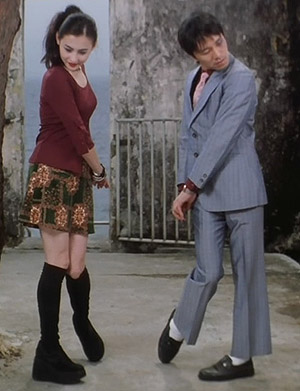 Although the film will not feature the old cast, fans were thrilled when Stephen met up with original female lead, Cecilia Cheung (張栢芝). Having worked on the movie 20 years ago, the two were happy to catch up and reminisce about the past. Not having forgotten Cecilia’s performance 20 years ago, Stephen revealed that Cecilia will actually have a cameo role in the movie.

Talking about their previous filming experience together, Cecilia revealed, “I wasn’t even scared of him, in fact – I was more scared that I wouldn’t go a good job. But I knew I could do it well if I put my mind to it.”

Despite The New King of Comedy‘s release date only weeks away,  Stephen revealed very little information about this upcoming movie. The trailer was only released just last week and only offered a teasing glimpse of the film’s contents. As director of the film, Stephen revealed the same concept as the original will be maintained despite a brand-new story. The story will revolve around a struggling actor’s road to stardom through hard work and dedication.

Supporting Stephen, Cecilia believes that this new movie was a good choice for him to direct, and thinks that The New King of Comedy will still retain all of Stephen’s original comedic style.

Teaser Trailer for “The New King of Comedy”