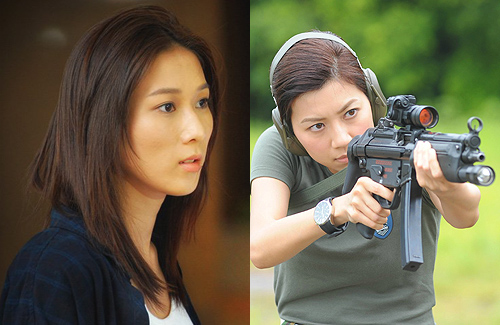 TVB introduced some of its strongest female characters yet in Tiger Cubs 2 <飛虎II >, which premiered on Sunday, October 19. The 10-episode action-packed crime drama, which is the sequel to 2012’s summer hit Tiger Cubs, follows an elite team of paramilitary officers from the Special Duties Unit (SDU) of the Hong Kong Police Force. Although mostly dominated by a male cast,  Linda Chung (鍾嘉欣) and Mandy Wong‘s (黃智雯)  characters manage to stand out.

Known for portraying kind and gentle characters, Linda Chung (鍾嘉欣) made a 180-degree turn for her role in Tiger Cubs 2. Her role, Chung Wai Yan, was one of the most challenging in her career. “She is a CIB investigator who was a former undercover. She was betrayed and her identity exposed. Because of that, she becomes manic. She completely distrusts people and disregards danger to arrest criminals.”

Linda is grateful to the producer for offering her such a different role. Linda said, “I’ve always thought I could do more than just playing obedient characters. I can handle more difficult characters, and this drama definitely shows the audience a very different Linda.”

To show the manic side of her character, Linda had to be aggressive in her movements and voice. It was tiring and mentally exhausting, but Linda is satisfied and happy with her performance. “My most memorable scene was the part where my identity was exposed and was nearly beaten to death. When I filmed that scene, I put myself in this maniacal state. I also told the staff to make sure my handcuffs were tight and secure so I would be able to put myself in that state.”

Dominated by a nearly all-male cast, Linda’s character exhibits a strong personality that challenges traditional female stereotypes. “My character is someone who has the skill and strength of many men,” said Linda. “Because of that, I tell myself that I cannot lose to them and I have to prove myself.”

In Tiger Cubs 2, Mandy Wong reprises her role, So Man Keung, as Hong Kong’s first female SDU member. Despite her confidence and unwavering determination to succeed as an active SDU officer, Mandy said her character will encounter various challenges in the team.

Mandy explained, “A woman’s physical strength is different from a man. During her training, she encountered these obstacles. She knew she was not as physically strong as men, so she wanted to overcome that with more diligent practice. One operation damaged So Man Keung’s spirit, which led her to question herself if she was still suitable to be an SDU officer.”

Facing similar challenges in real life allowed Mandy to completely immerse into her character. “I didn’t wear full gear on my first day of work, just a tank top and long pants. I had to a scene where I had to run back and forth while carrying bricks. After filming the scene, I felt really hot and thought I was having a fever. It turned out that I had a heatstroke. That was only on the first day. It made me very worried.”

Filming the physically demanding drama in the summer heat was taxing on the entire cast. Mandy said, “We got through it all together with teamwork.”

The sequel follows Mandy and Him Law‘s (羅仲謙) developing relationship as a bickering couple. “We share a unique relationship. We are dating, but we are also kind of like comrade-in-arms. He trains with me and supports me. We both have very strong personalities. We’re not a typical couple.”