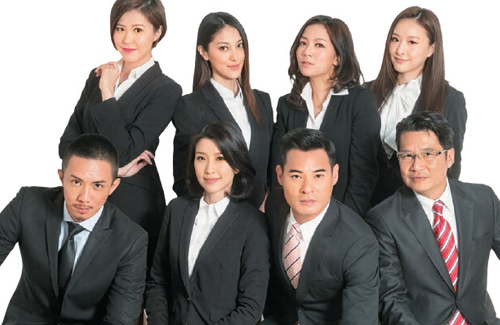 TVB’s legal drama Raising the Bar <四個女仔三個BAR> aired its final episode on February 27 to a lot of buzz. A hot debate online was started when it was uncovered that TVB originally had a different ending planned for the series.

The final scene aired featured Grace Chan (陳凱琳), Jeannie Chan (陳瀅), Stephanie Ho (何雁詩), and Moon Lau (劉佩玥) meeting with their mentor Ben Wong (黃智賢) in front of the Court of Final Appeal. A voice-over quoted the words of Hong Kong Chief Justice Geoffrey Ma (馬道立): “I’d like to remind the people of Hong Kong, that when facing adversity, do not forget the basic factors that helped Hong Kong in the past.” The scene ends with Grace looking over at the entrance of the Court of Final Appeal, with the song “We Shall Overcome” playing in the background.

After the finale ended, a netizen discovered that an alternate ending to the series has been circulating online. In this ending, the main characters in the series stand in front of the Court of Final Appeal with their heads down, participating in a silent protest. This is a direct reference to a similar demonstration that happened in June 2014, when 1,800 Hong Kong lawyers and scholars marched from the High Court to the Court of Final Appeal to protest against the Chinese government issuing a “white paper” that jeopardized Hong Kong’s judicial independence.

The alternate ending became a hot topic online, with some netizens claiming that TVB is practicing self-censorship to appease its mainland Chinese viewers. Others supported the current ending TVB chose, and said that the “hidden” ending actually did not make much sense to the storyline. Another set of netizens claimed that there was actually a third ending, which showed the characters marching to the Court of Final Appeal without a voice-over.

In response to the debate, Raising the Bar producer Joe Chan (陳維冠) clarified that there was only one official ending for the series, which was the ending TVB chose to broadcast. Overseas broadcasts of the series also showed the same ending.

As to why the alternate ending for Raising the Bar was leaked online, Chan said he would look into it. Regarding that many netizens believe TVB is practicing self-censorship, Joe Chan expressed that the leaked ending was cut off because it did not comply with the original storyline.

According to various sources, the leaked ending actually came from the DVD version of Raising the Bar, which will be released by TVBI in Malaysia.