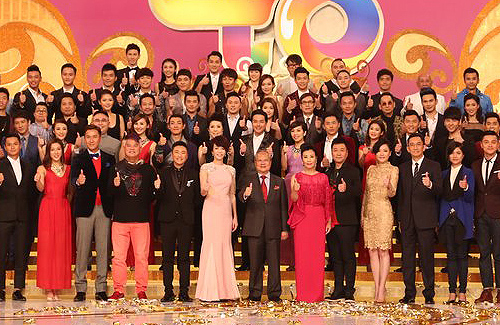 TVB held a light switching ceremony to commence the celebrations for the station’s 47th anniversary on October 20. The ceremony was attended by numerous TVB stars, including the casts of Tiger Cubs 2 <飛虎II>, Overachievers <名門暗戰>, Come On, Cousin <老表，你好hea!> and the winners of The Voice <超級巨聲>.

TVB artistes attended the ceremony dressed in stylish outfits. Toby Chan (陳庭欣) stood out among the female celebrities with a low-cut tank top that revealed the sides of her midriff. Lin Xiawei (林夏薇) and Rebecca Zhu (朱晨麗) also wore gowns that accentuated their best features.

Samantha Ko (高海寧) and Eliza Sam (岑麗香), both known for their voluptuous figures, dressed conservatively that night. The two actresses explained that they did not want to reveal too much as they had to do a dance performance. In regards to gossip reports that Samantha wanted to drop her sexy image to completely focus on her acting career, Samantha clarified that while she is serious about acting, she does not mind continuing her sexy image if it is suitable for the occasion.

TVB’s rising star Sisley Choi (蔡思貝) attended the event with rumored boyfriends Fred Cheng (鄭俊弘), Him Law (羅仲謙), Alan Wan (溫家偉), and Adrian Chau (周志文). Sisley said their love rumors did not affect their friendship and she had the opportunity to chat with them. Sisley confessed that she was upset with the unfounded reports and said, “Maybe the audience will believe [in the love rumors], but there’s nothing we can do about them. I’ll treat it as promotion.” Regarding earlier reports claiming that Sisley had spent the night at Adrian’s hotel room, Sisley explained that that never happened and was disgusted by the tabloids. Sisley also denied feeding Adrian while eating dessert. “I talk with a lot of arm movements. They just caught me at the wrong angle.”

Selena Li (李詩韻) was reported to have moved to a much larger home after finding a new wealthy boyfriend. The 33-year-old admitted to moving, but it was actually to a much smaller house. “I moved to Tai Hang recently, but it was to a smaller home. I have to save money to help out with my sister’s tuition.” Selena said she and her boyfriend maintain separate finances, and denied the rumors saying that her boyfriend comes from a wealthy family.

Lawrence Ng (吳啟華), who currently stars in prison drama Tomorrow is Another Day <再戰明天>, revealed that it has been a little over two months since he had last seen his daughter. Lawrence’s wife and daughter currently live in Mainland China, but Lawrence wants them to return to Hong Kong. “The weather and food in Hong Kong is better after all. My daughter will be going to primary school next year. I guess it is time to hold a family meeting,” he added with a laugh. Lawrence said he is planning to put his daughter in an international school.

TVB Chairman Norman Leung (梁乃鵬) was asked to comment on rival station, HKTV, launching its online broadcasting service on November 19, TVB’s Anniversary day. Leung stated, “I don’t think we’re putting on a rival show. TVB has been on air for 47 years, and if Ricky Wong (王維基) wants to open his service on that day, then it is his right to do so. I don’t want to criticize him. I can only say that he is not operating a television business, but an online business.”