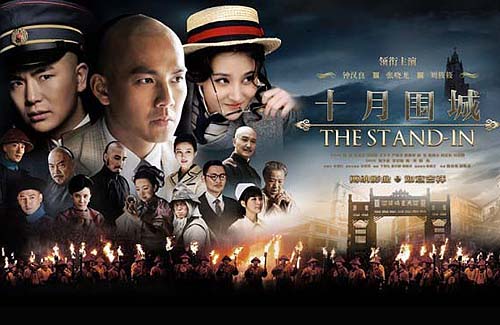 In The Stand-In, Wallace plays two characters: Li Chongguang, the son of a rich businessman, and Deng Sidi, who is hired to be Chongguang’s stand-in after the latter is killed when acting as a decoy for Sun Yat-sen. Ah Si, as Sidi is known, thus finds himself caught in the middle of the strife between the revolutionaries and the Qing government.

Because of his good looks, Wallace is usually shoehorned into lofty roles similar to Chongguang, and he is rarely cast as characters from the lower rungs of society. Nevertheless, he took the plunge for The Stand-In, even shaving his head for the first time in seven years. This new type of role is his latest attempt to add more variety to his acting repertoire.

“When you reach my age, you want to have more courage to challenge yourself,” explained Wallace. “For example, with Demi-Gods and Semi-Devils <天龍八部>, many people felt that I should have played Duan Yu, but I decided to act out Qiao Feng, because I wished for my acting career to have more color.”

After The Stand-In, Wallace is eyeing any type of drama that he has not tried before, though he emphasized family dramas like the long-running Countryside Love <鄉村愛情>, which began broadcasting in 2006 and aired its seventh season this past year. “After watching it, I thought it was very funny and interesting, even though their humor is not the same as in the south,” Wallace said.

Moving Beyond the Original Movie

Based on the 2009 Hong Kong film Bodyguards and Assassins <十月圍城>, The Stand-In fleshes out the movie’s plotline in its first two episodes before moving on to entirely new material. Although the series is expected to last 60 episodes, director Guk Gaau Leung (鞠覺亮) feels confident that the drama will captivate audiences, since “the storyline is very abundant.”

Wallace also praised The Stand-In’s screenplay, which was helmed by A World Without Thieves <天下無賊> screenwriter Lin Lisheng (林黎勝). “It’s hard to come across such a good screenplay,” he said. “Each character in the script has his or her own story.”

Known for his adaptations of Jin Yong’s (金庸), director Guk is quite cautious of the usual pitfalls that surround remakes. “The point of remakes is to find what didn’t work in previous adaptations and fix those, so the show will be better,” he shared. “If what you film is based only on what came before, there is no meaning to it.”