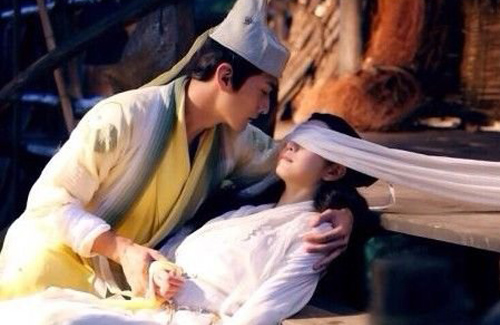 Above: The violation of Little Dragon Girl in “The Condor Heroes”.

The Condor Heroes <神鵰俠侶> has been the subject of widespread derision since its inception, due to producer/screenwriter Yu Zheng’s (于正) track record of rewriting characters so that they no longer resemble their original counterparts. Though his previous reinterpretations have been confusing at worst, none will raise the audience’s ire like his newest character update, which seems intended to pardon a character for raping the female lead.

Based on the classic wuxia novel Return of the Condor Heroes by Jin Yong (金庸), The Condor Heroes is the love story of rebellious Yang Guo (Chen Xiao 陳曉) and his martial arts teacher Little Dragon Girl (Michelle Chen 陳妍希). Among the many characters who disapprove of their relationship is Daoist priest Zhen Zhibing (Song Yang 宋洋), who himself is in love with Little Dragon Girl. He later takes advantage of her when she is immobilized, causing a misunderstanding between her and Yang Guo, which leads to their temporary separation.

In previous interviews, Yu Zheng faced criticism when he reported that his version of Zhen Zhibing would be “more adorable.” However, his interpretation of the character appears to be an attempt to not only to make the Daoist priest more likable, but also to completely absolve him of any guilt concerning the rape scene. In fact, in The Condor Heroes, Zhen Zhibing rapes Little Dragon Girl not out of lust, but because he was forced to after being poisoned by another character.

“Zhen Zhibing, extremely good scene, with an absolutely flaming rhythm!” gushed Yu Zheng when he posted stills of the related scene on his Sina Weibo account. Although the photographs may look aesthetically pleasing, netizens are less impressed with Yu Zheng’s changes to the original storyline, calling his adaptation “a hideous mess.”