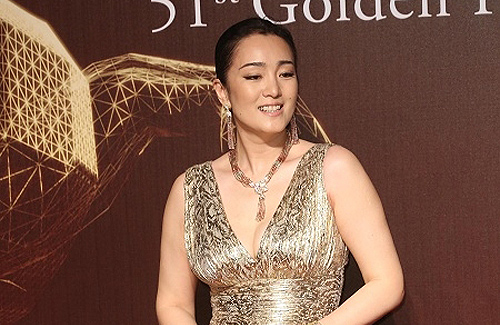 Gong Li (鞏俐) has won international accolades in her career, including the Best Actress award at the Venice Film Festival, and serving on the judging panel for the Berlin Film Festival. She was, however, particularly disappointed when she failed to win Best Actress at the recently concluded 51st Golden Horse Awards in Taiwan, which she criticized as unfair in its voting system.

Through her manager, Gong Li questioned why the nominating panel who selects the initial nominees are allowed to vote again with the jurors on the final results. Since she believes such a voting system produces unfair results, Gong Li said this will be her last time attending the Golden Horse Awards.

Gong Li was nominated for the award based on her role as an amnesiac woman in the film, Going Home <歸來>. She was a hot favorite, and many pundits had expected her to win. To everyone’s surprise, the winner of Best Actress turned out to be Chen Shiang Chyi (陳湘琪), a relative unknown who played the role of a sexually frustrated, menopausal woman in the Indie film, Exit <迴光奏鳴曲>. Allegedly, Shiang Chyi had home-ground advantage, and Gong Li merely lost by one vote among the judges.

Many Mainland fans have expressed sentiments that the result at the awards ceremony were unfair. Gong Li said through a shocking statement issued by her manager, “I would like to thank the Golden Horse Awards panel for giving me this opportunity to witness the workings of an unprofessional film festival. A film festival that is biased will cause all the people in the industry to look down on it.”

She added that she liked Taiwan and wished to re-visit Taiwan, but as a tourist and never again as a participant of the “amateurish” and meaningless film festival.

A representative from the Golden Horse Awards executive committee, Shen Ko Shang (沈可尚) clarified that Joan Lin was the first judge to praise Gong Li’s acting during the judging process, and she was equally disappointed by the results but had to respect her fellow judges’ decisions.

There were three rounds of voting in total, with Joan Lin, Aaron Kwok (郭富城), Stanley Kwan (關錦鵬) and Stephen Fung (馮德倫) voting for Gong Li throughout. In the first round, Gong Li, Shiang Chyi and Vicki Zhao (趙薇) were tied. In the second round, Gong Li managed to gain a slight lead ahead of the other two actresses. In the third round, however, someone who had initially voted for Vicki chose to vote for Shiang Chyi instead. Shiang Chyi thus emerged as the winner.

Reactions from the Rest of the Film Industry

Gong Li’s controversial remarks sparked reactions from the film industry. Speaking as Chairperson of the Golden Horse Awards executive committee, Sylvia Chang (張艾嘉) said, “These remarks were not personally made by Gong Li.”

Best Actress winner Chen Shiang Chyi said, “Perhaps Gong Li was too disappointed. To me, I am a winner as long as I performed well, and could love the people I love.”

Scriptwriter Shu Kei (舒琪) was far more hostile in his reaction. In a Facebook post, he said that having talent and popularity did not guarantee one an award, using the example of prominent Hollywood actress, Meryl Streep, who did not always win at the Oscars. He then asked facetiously if Gong Li thought herself better than Meryl Streep? He also remarked that Going Home was a poor movie, with Gong Li’s mediocre performance being the only redeeming factor. He then said that Gong Li might see herself as being on top of the world, but she was, in reality, a frog in the well. Shu Kei concluded his rant by expressing that he would not watch Gong Li’s movies anymore.