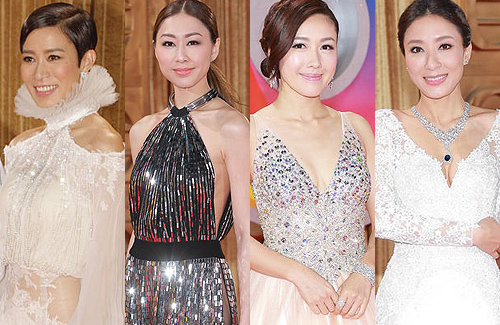 Edwin Siu appeared gallant in all-white suit by Dorian Ho and contrasting sheer black bow tie. The washed out champagne-colored accents on his blazer added an interesting intonation to his outfit.

Natalie Tong appeared youthful and demure in a champagne-colored gown by Mikael D. The thread-like design of the dress looks similar to a curtain, but she pulled off the dress well.

Myolie Wu wore a difficult mermaid dress with a sweetheart neckline. The body-hugging dress by Kev Yiu embraced her hourglass figure. Although the busy design of the top half of her dress is slightly distracting, it adds an interesting and eye-catching emphasis to her overall look. Jinny Ng wore a sexily sheer, gray-colored gown by Kev Yiu. Though chic and modern, the busy dress distracted attention away from the wearer.

Nancy Wu stepped on to the red carpet like a walking disco ball in this metallic dress. The high neck halter and black waist belt accentuated her figure though. Tavia Yeung played it safe in a wedding gown-like dress by Viola Chan. Although she held back on excessive jewelry by not wearing earrings, the already-busy long laced sleeve of her dress deemed her bracelet accessory pointless.

Sharon Chan’s beautiful Alex Lam dress was sensual and soft. The sheerness of the bottom half of her dress timidly displayed her long legs. The softness of the dress is enhanced by the feathered bottom. Most Improved Actress Priscilla Wong glowed in a simple Pius Cheung white dress. Although the sleeves of her dress seem to look like a little girl’s sleeping gown, her side ponytail hairstyle and overall look made her appear gorgeously demure.

Linda Chung embraced her jade girl image and appeared fresh in an off-shoulder white dress by Marco M Chan. While the sheer sleeves are lovely, the Victorian-style dress is loose and lacks cutting, appearing like a borderline sleeping gown from Victoria’s Secret.

As opposed to Linda’s white dress, the design of Charmaine Sheh’s dress is body-hugging in the right places and is appealing to the eye. The neck-piece, however, is awkward and resembles the “cone of shame.” Her makeup also makes her appear washed out and tired. Yet again, Eliza Sam exudes her innocent and youthful charm in a princess ball gown. Her magenta-colored lipstick, however, throws off the elegance of her overall look. Kate Tsui’s current color of choice seems to be black, as she is seen here in a bodice-hugging black dress that is extremely similar to the gown she wore at the TVB Star Awards Malaysia 2014. Although similar, the difference lies in the floor-length navy blue ruffles of the dress.

Appearing with a healthy tan, Leanne Li wore a black trumpet gown from Galia Lahav. With the extremely low V-cut neck of the gown, a necklace would have suited fittingly.

Samantha Ko’s overall appearance was slightly reminiscent of Dracula. In a Kev Yiu dress, slicked back hair, and popping red nails and lipstick, Samantha appeared bold and daring. The sweetheart neckline of the dress and waist belt highlighted her figure. Is Krystal Tin promoting for Ada Choi’s TVB drama, Fly With Me? Although unique, the white overlay and black shimmery shorts underneath seem gawky.

Lifted by the holiday spirits, Louisa So attended the event in a glossy red dress with green, blue, and gold colored flecks that resembled Christmas wrapping paper.

Wayne Lai appeared short and squat in the long blazer and a pair of dress pants that seemed too small for him. The Michael Jackson-inspired shiny dancing shoes threw off his refined attire completely. Selena Li’s petite frame was consumed by the large flowing ball gown dress. It seemed to take a lot of effort to haul the heavy dress around.

Liza Wang and Carol Cheng looked like walking stripes in their color-coordinated gowns. Kenneth Ma was dashing in a traditional white and black suit. But why does he have a tendency to not wear socks?

Although Vincent Wong is tall, the trench coat was too big for his lanky figure.

Showing off his love for his family, Roger Kwok wore a custom-printed suit with impressions of his son and daughter. His outfit had just the right bling for a TV King. Ruco Chan, Him Law, and Bosco Wong were determined to dress hip at the 48th TVB Anniversary Awards, but failed miserably.

If Ruco swapped hats and shoes, his outfit is still salvageable.

Him Law may have mistaken the invitation to model at a fashion runaway in the heavily plaid ensemble from Avenue 1218 with loud jewelry.

Rolling his eyes at the camera, Bosco Wong did not seem to want to be at the Anniversary Awards. Camouflaging himself in a patterned Valentino suit; did he plan for a quick getaway in matching sneakers?