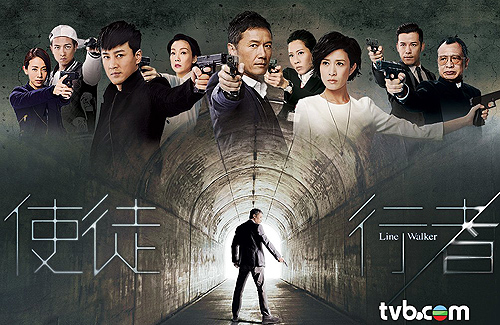 TVB announced plans to produce a movie version for the crime thriller drama Line Walker <使徒行者>, which completed its 31-episode broadcast run on October 3. The project is slated to film next year, and TVB has invited Louis Koo (古天樂) and Mainland Chinese actor, Guo Tao (郭濤) from Dad, Where Are We Going? <爸爸去哪兒> to join the cast.

According to reports, TVB plans to make a movie version of Line Walker. Most of the original cast will return to star in the film, in addition to new cast members for new characters. Allagedly, the movie will retain its storyline about undercover agents. It will also explore the background of Foon Hei Gor, famously portrayed by Benz Hui (許紹雄), and his story before he quit his business.

TVB executive Virginia Lok (樂易玲) revealed, “The reaction [of the series] is very good. Although Hong Kong’s ratings are not out yet, the series generated more views than any other TVB drama on mainland Chinese websites. Even Triumph in the Skies 2 had a movie version, so we are considering one for Line Walker as well.  In terms of the characters for the film, we will add film actors to accommodate the market. As for the subject matter, we will have to cut the idea of having ‘black cops’ so we can conveniently push the film to the Mainland market.”