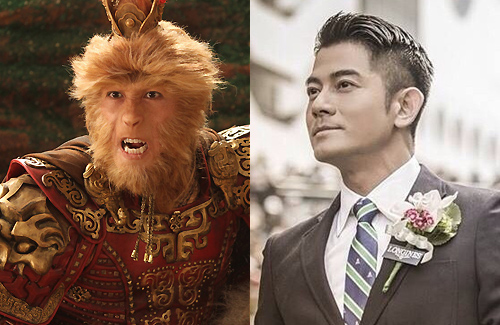 Donnie Yen’s (甄子丹) The Monkey King <西遊記之天鬧天宮> was released in January and earned approximately 1.53 billion RMB in the Mainland box office, becoming the third highest grossing Chinese film of all time. Originally playing the Bull Demon King, Aaron Kwok (郭富城) is rumored to replace Donnie Yen (甄子丹) as Sun Wukong in the second film, which will start filming in Wuxi at the end of November.

Since Donnie already has film projects including Ip Man 3 <葉問3> lined up until next year, he is unable to return for the sequel to The Monkey King.

Aaron’s manager stated, “Aaron will take part in the second film of The Monkey King, but the details and character will be officially announced by the production company.” Although not confirmed, Aaron has shared several photos of himself as the Monkey King on his Sina Weibo blog. His portrayal of the famed character will capitalize on his agility due to his dance background.

The second film will focus on the story of the White Skeleton Demon, who will be portrayed by Gong Li (鞏俐). Allegedly, William Feng (馮紹峰) will play the Holy Monk, Xiao Shen Yang (小瀋陽) will play Pigsy, and Hu Ge (胡歌) will play the Dragon Horse.

Additional details of the project will be kept secret to heighten anticipation for the film, which is scheduled for a 2016 release. The staff will utilize new makeup techniques and computer-generated animation to produce the best results. The design of the Skeleton Demon will be the highlight of the film.

The film’s largest investor, Huang Haifeng (王海峰), declared his intentions of producing a total of eight films related to the story of Journey to the West.