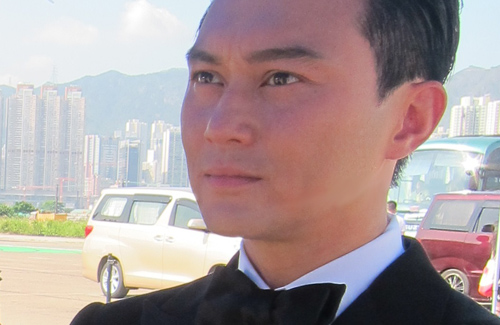 Chilam Cheung (張智霖) attended a press conference on September 10 to officially sign with new management company China 3D Digital Entertainment and to renew his music contract with former label Star Entertainment. Inspired by Chilam’s recent popularity as suave pilot Jayden Koo, the companies prepared an elaborate event to welcome Chilam into the family, complete with a helicopter and models dressed as air stewardesses. Although he kept mum about his new salary, Chilam did reveal a very packed schedule and many exciting projects for the next year.

Chilam’s music label boss, Star Entertainment’s Sit Jai Kit (薛濟傑), was also present at the event. Last year, rumors arose when Chilam declined to renew his music contract with Neway Star, one of Star Entertainment’s record labels. Some speculate conflict between the two parties, and were surprised that Chilam decided to renew with his former label this year. Chilam responded to these rumors at today’s event, saying, “Those emotional misunderstandings are things of the past. I don’t want to discuss them anymore. Everything is fine now.”

When asked about his new salary, Chilam said he is unable to talk about it since it is an industry secret. He added that Mr. Shiu did not give him any stock options, but to him, having ample work opportunities is far more important than the price on the contract.

Chilam also revealed his upcoming projects, saying he plans to work in television, film, and music simultaneously. When asked about Mr. Shiu’s intent to film a movie version of Triumph in the Skies <衝上雲霄>, Chilam said it is good news and that he has no preference over actors he would like to work with. He shared that he will release a cover album in the near future, and has already recorded Eason Chan’s (陳奕迅) popular Triumph in the Skies theme song “Years Like a Song” <歲月如歌> as the album’s first single. Chilam is also scheduled to hold a solo concert at the Hong Kong Coliseum next August, and may star in two films within this year.