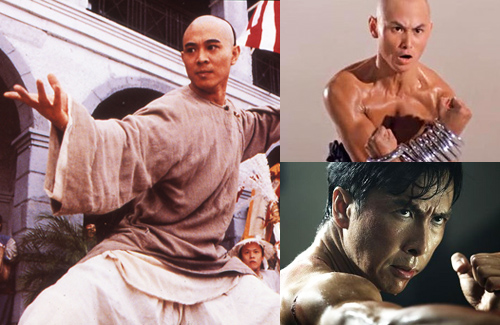 The glory days of Chinese martial arts films is said to have begun with Hong Kong cinema, specifically with Hung Ga Kuen (洪家拳), a form of martial arts originating in southern China. With the explosion in popularity of kung fu films, different fighting styles have emerged in the limelight throughout the years, from Jeet Kun Do (截拳道) and Wing Chun (詠春) to Tai Chi (太極) and the currently red-hot style of mixed martial arts (MMA).

Hung Ga first came to prominence in 1949, when Hong Kong director Hu Peng (胡鵬) unveiled a film about Chinese folk hero and Hung Ga expert Wong Fei Hung (黃飛鴻). The movie, Story of Wong Fei Hung <黃飛鴻> set the stage for Hong Kong fighting films and sparked so much interest in Hung Ga that male lead Kwan Tak Hing (關德興) went on to portray the same character more than 75 times over the next thirty years. Hung Ga masters like Lau Kar Leung (劉家良) and Gordon Liu (劉家輝), both of whom had studied the art under grand-disciples of Wong Fei Hung, also enjoyed thriving action movie careers thanks to their martial arts background.

In 1978, Jackie Chan’s (成龍) film career received a popular boost after portraying Wong Fei Hung in Drunken Master <醉拳>, in which he showcased zui quan, or drunken fist forms which are found in most Hung Ga lineages. Jackie’s interpretation was highly acrobatic and featured his trademark comedic kung fu stunts. As time passed, however, viewers began to tire of seeing Hung Ga on the screen. Although the style was undeniably effective in real life, it lacked a visual beauty that audiences were craving. In 1991, Hong Kong director Tsui Hark (徐克) attempted to bring new life to the style with his Once Upon a Time in China <黃飛鴻> series, which starred Jet Li (李連傑) as Wong Fei Hung. Similarly, Donnie Yen (甄子丹) tried a new reinterpretation of Hung Ga with his 1993 film Iron Monkey <鐵馬騮>, but the action choreography in these movies was said to diverge too widely from traditional Hung Ga with heavy reliance on wire work.

As a result, Hung Ga began to fall out of favor around the turn of the century. The most recent memorable depiction of the style was likely with Stephen Chow’s (周星馳) 2004 film, Kung Fu Hustle <功夫>, which featured actor-stuntman Chiu Chi Ling (趙志淩), a Hung Ga master whose name was as well-known in his prime as that of Bruce Lee (李小龍) in the American martial arts world. Jeet Kun Do, a hybrid martial arts style founded by Bruce Lee in the late 1960s, caught fire on the silver screen in the early 1970s, thanks to classic Bruce Lee films like Fists of Fury <精武門> and Enter the Dragon <龍爭虎鬥>. Because the aim of Jeet Kun Do is to break the restrictions of rigid fighting forms and adopt the strengths of other fighting styles, it is often compared to mixed martial arts, and some people even say that Bruce Lee is the father of MMA.

After Bruce’s rise in popularity and his death in 1973, interest shifted to the Wing Chun style, which Bruce had learned from Yip Man (葉問) and had heavily influenced his own martial arts philosophy. 1981 saw the release of Sammo Hung’s (洪金寶) The Prodigal Son <敗家仔>, which shook audiences with its depiction of Wing Chun and later won a Hong Kong Film Award for Best Action Direction. Because of this film, Donnie Yen invited Sammo to collaborate on his Ip Man <葉問> movie series, which is possibly the most wide-reaching film about Wing Chun in recent years.

Jeet Kun Do and Wing Chun coexisted peacefully during the turn of the century, and audiences were content with the direct and succinct fighting styles. Although there were admittedly a few duds among the many kung fu films swarming the market at the time, this time also saw the emergence of classics like Fist of Legend <精武英雄>, which featured action choreography by Yuen Woo Ping (袁和平) and garnered much reverence among action film fanatics.

Early attempts at depicting tai chi, such as the Shaw Brothers’ Tai Chi Chuan <太極拳> in 1974 and Donnie Yen’s Drunken Tai Chi <笑太極> in 1984, struggled with communicating the internal power of this martial art. A true masterpiece did not emerge until 1993’s Tai Chi Master <太極張三豐>, in which Jet Li used his superior martial arts foundation to make tai chi understandable for the average viewer.

Since tai chi is a national pastime in China, many Chinese martial arts actors have performed the art at least once in their careers, and tai chi even made an appearance in the animated film Kung Fu Panda. Recently, films like Stephen Fung’s (馮德倫) Tai Chi 0 <太極之零開始> and Tai Chi Hero <太極２英雄崛起> and Keanu Reeve’s Man of Tai Chi <太極俠> have attempted to restore tai chi to its glory days. Other styles of martial arts, such as Muay Thai and Western-style fighting, have previously been portrayed in Chinese action films, though they are usually practiced by the villains and are subsequently proven inferior to kung fu. Thanks to the emergence of mixed martial arts (MMA) films, however, Chinese audiences are now able to witness a wider variety of fighting styles that is catered toward their visual preferences.

MMA made its first noticeable appearance in Chinese cinema with Donnie Yen’s 2005 film, SPL <殺破狼>. Two years later, he set the gold standard for MMA choreography with Flash Point <導火線>, and his upcoming film, Special ID <特殊身份>, is said to be the last movie in his trilogy showcasing classic MMA.

Many people have drawn comparisons between MMA and Jeet Kun Do, thanks to their realistic combat qualities, though the former is said to focus more on organized arena battles, whereas the latter revolves more around street brawls and actual fighting. Nevertheless, as MMA continues to develop in cinema, actors and choreographers will undoubtedly find a way to strike a balance between it and the more traditional styles.