“Dad, Where Are We Going?” Movie Version to Open January 31 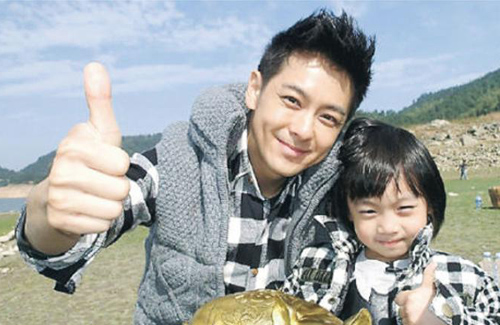 Above: Jimmy Lin and son, Kimi, appear in the film version of “Dad, Where Are We Going?”

The popularity reality show, Dad, Where Are We Going? <爸爸去哪兒> is about to wrap up its first season, with its final episode slated to air on December 27. While fans speculate which father-child pairings will return for the next season, they will also have a chance to see their favorites on the silver screen, when a movie version of Dad, Where Are We Going? hits theaters on January 31, 2014.

Since Dad, Where Are We Going? became an instant cash cow for Hunan Satellite TV, with a related mobile game breaking 3 million downloads in less than three days, it may come as no surprise that the producers have decided to strike while the iron is hot. The idea of a movie tie-in is almost second nature, with variety shows like The Voice of China <中國好聲音> and Super Boy <快樂男聲> also subscribing to this arrangement.

However, some fans have voiced their concerns that a movie version of Dad, Where Are We Going? is too opportunistic, especially since filming for it was completed in just one week. They also fear that the movie will focus more on jokes than on content.

In response, Zhao Hui (趙暉), a manager of the film’s production company, EE-Media, assured fans that the movie version had already been in the works for the past two months. “After the second episode of the television version was broadcast, we decided to film a movie version,” said Zhao.

The movie, which reportedly did not have a fixed screenplay, will feature a Lunar New Year theme. Though Zhao kept quiet about most of the details, she did reveal that the cast members’ goal is to obtain a mysterious invitation letter, and that “animals” would play an important part.

Although the children’s appearance fees have skyrocketed alongside their fame, Zhao shared that the children did not receive any monetary compensation for filming the movie version. “We did prepare snacks and toys for them, which are more attractive to them,” she explained.

13 comments to “Dad, Where Are We Going?” Movie Version to Open January 31