Director Roy Chow Praises Eddie Peng as Wong Fei Hung: “In My Mind, There Was No Other Candidate” 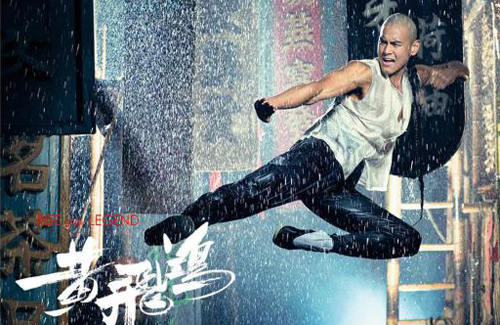 The first promotional poster for the upcoming film Rise of the Legend <黃飛鴻之英雄有夢>, the latest adaptation about the life of martial arts star Wong Fei Hung (黃飛鴻), was recently revealed. The image shows Taiwanese actor Eddie Peng (彭于晏), who is playing the lead role, airborne in the rain as he utilizes Wong Fei Hung’s famous Shadowless Kick. Although there have been doubts about Eddie’s suitability for the role, director Roy Chow (周顯揚) is confident that Eddie will live up to his expectations.

Since Rise of the Legend began filming in August, many have wondered if Eddie, who has no martial arts background, would be able to pull off the role as successfully as those in the past have, particularly Jet Li (李連杰). Roy shared that, after joining the cast, Eddie would practice every day without rest. In addition to his grueling training regime, he would also undergo additional physical exercise. Most impressively, almost all of Eddie’s action scenes have been completed through his own efforts, and none have called for the use of a stunt double.

It was Eddie’s dedication in previous films that caught the director’s attention. “[Eddie] didn’t know gymnastics earlier, but he became a gymnastics athlete for Jump Ashin! <翻滾吧！阿信> And he turned himself into a boxer for Unbeatable <激戰>,” said Roy. “You tell me, which actor would I use if I didn’t use him? In my mind, there was no other candidate.”

At a recent press conference, Eddie appeared slim and haggard, and his voice seemed rough. He remarked that this movie was “the most tiring and most difficult” project he had ever filmed, but added, “In order to be Wong Fei Hung, you have to do many things you’ve never done before in your life. When I decided to act in this film, I had to take hold of this once-in-a-lifetime opportunity and do the best I can.” After making a brief appearance, he rushed back to the set to continue filming his next scene.

With the release of the promotional image, which was taken by well-known Hong Kong photographer Wing Shya (夏永康), viewers will perhaps be more approving of Eddie after getting their first glimpse of his efforts.

Although Hong Kong star Angelababy (楊穎) was previously reported to be the female lead of Rise of the Legend, mainland Chinese actress Wang Luodan (王珞丹) will be starring instead. Angelababy will still play an important character, but her role has not yet been revealed.

The director shared that Wang Luodan and mainland Chinese actor Jing Boran (井柏然) will both be playing new characters who have never appeared in previous Wong Fei Hung movies. Luodan will be a skilled female fighter, whereas Boran will play a simultaneous friend-and-enemy to Wong Fei Hung.

Since she normally acts in modern television dramas, Wang Luodan shared that she wanted to try her hand at an action film because, when she stayed in the United States for three months last year, many Americans asked if she knew martial arts after they found out she was a Chinese actress. As this is her first time participating in an action movie, she made many preparations for the inevitable injuries due to filming. “The director said you can get injured anywhere,” she said, “as long as it’s not your face.”

In order to encourage the cast and crew of Rise of the Legend, director Roy Chow allowed Jing Boran to shave his head during a recent promotional event. Although the cast has already filmed consecutive night scenes, with workdays starting from 8 in the morning and extending until 4 or 5 the next morning, Roy remains confident that their efforts on this new film will help usher in a new era of Wong Fei Hung.

“It’s already been many years since this hero Wong Fei Hung has been adapted for the movie screen,” said Roy. “In the history of Chinese-language films, this is the longest ‘Wong Fei Hung vacuum’ in the past fifty years, so now would be the best time to reconstruct a ‘new Wong Fei Hung’ film series.”

2 comments to Director Roy Chow Praises Eddie Peng as Wong Fei Hung: “In My Mind, There Was No Other Candidate”