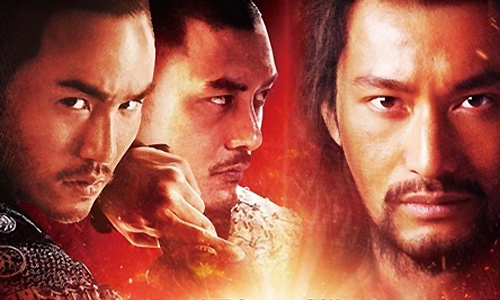 Ethan Juan (阮經天) who rose to fame with Fated to Love You <命中注定我愛你> not only managed to break the icy surface of Huang Xiaoming (黃曉明) but they also become good friends after filming The Guillotines <血滴子>.

The chemistry and camaraderie among the cast were so great that Ethan, Huang Xiaoming, and Shawn Yue (余文樂) became fast friends in no time. Apparently, Ethan was often like a big brother and initiated many activities such as playing basketball and getting together for hotpots. After filming a scene by the river where the cast decided to roast some sweet potatoes, the comical Ethan took up a stick and imitated renowned Taiwanese baseball player, Chen Chin Feng (陳金鋒). This created a huge uproar among the cast. Even the more aloof and cautious Huang Xiaoming was tickled by Ethan’s antics. Once, he was forced to make funny faces, much to the crew members’ and cast’s delight. That was an indeed a rare sight coming from the serious Huang Xiaoming!

Or maybe that was Ethan’s intention all along. He said of Huang Xiaoming, “He’s very handsome! But just too Bopomofo!” Ethan used the Taiwanese slang to describe Xiaoming as being too obstinate. In private, Ethan likes to share jokes with Huang Xiaoming to make the latter laugh.

“The Guillotines” Out on December 21

The latest 3D martial arts film, The Guillotines, is set in the Qing Dynasty and centers around an elite group of assassins, called the Guillotines, who carry out secret missions for the Emperor. The group is made up of street ruffians who are trained to be part of the Imperial-sanctioned band of assassins and their weapon of choice is the flying guillotine.

Ethan plays the leader of the assassins, all out to oust the rebel leader, Sky Wolf, played by Huang Xiaoming. However, they soon realize that the Emperor has an ulterior motive and has sent another agent on the same mission. The guillotines may have to fight for their own survival.

Alhough Huang Xiaoming is not new to period films, this is Ethan’s first. The Guillotines sees a lethal collaboration between producer Peter Chan (陳可辛) and director Andrew Lau (劉偉強 ) of the Infernal Affairs <無間道> trilogy. The film is set to be released on December 21, when the end of the world occurs.