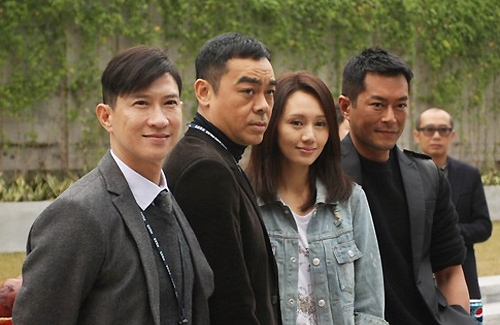 Currently filming for director Benny Chan’s (陳木勝) The Cartel War <掃毒> in Thailand, Louis Koo (古天樂) had to hang onto the bumper of a car to prevent himself from falling 10 floors below the exterior of a building yesterday.

Louis Koo, Nick Cheung (張家輝), Sean Lau (劉青雲), Benjamin Lam (林國斌) and Kenneth Low (盧惠光) are on location filming in a barren land located about 40 minutes drive away from Bangkok. Universe Films has chosen the notorious building in Thailand where several murders had taken place, but the ominous atmosphere did not deter the actors from professionally filming the dangerous stunts.

A History of Injuries

Louis has a record of getting hurt in the midst of filming. In 2011, while filming A Chinese Ghost Story <新倩女幽魂>, he broke his leg ligament. And more recently in Inferno 3D <逃出生天>, he hurt his hand. Despite that, and the sinister history of the location, Louis insisted on not using a body double for this particular scene where he was chased by Benjamin and Kenneth in a car. Louis was pushed by the car to the outside edge of the building. In order to prevent himself from falling off the tenth floor of the building, Louis had to hold onto the bumper of the car while hanging in mid-air.

To play it safe, Louis was armored with tight safety clothing but that did not help avert scratching his hand in one shot, causing him to bleed profusely. A first aid team on location came to his rescue promptly, preventing further infection. To Louis, this was a minor mishap compared to his previous experiences. Louis said, “The shot was not the hardest nor was it the most dangerous. I remember in Connected <保持通話>, I was almost driven down the mountain by a car; and in a baby-saving scene in Rob-B-Hood <寶貝計劃>, I fell and rolled down the road. Those times were definitely more dangerous. The dangerous thing this time is the suffocating safety clothing!”

Nick Puts off Surgery for Film

Louis is not the only one who puts himself at risk. Because of a previous accident, Nicky’s pinky finger has been twisted, which caused the finger to be bent in a z-shape. Despite that, Nicky had to jump onto the car in the same scene and pull Louis out of his predicament. Though his finger could not be straightened, Nicky feels he still has the ability to do action scenes such as this one. Because of his busy filming schedule, he is postponing his surgery appointment until filming concludes.

Producer Jay Lam (林小強) made sure that tight safety measures were put in place while filming and he reassured that insurance worth as much as $10 million HKD has been bought for each actor.