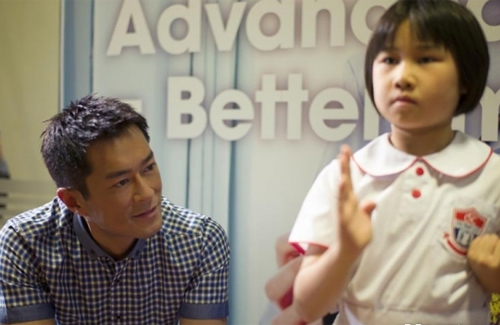 Director Pang Ho Cheung (彭浩翔) draws experiences from his own life in Aberdeen <香港仔>, a film that follows the inner turmoil of a Hong Kong family and loyalty of the heart. Aberdeen is a departure from Pang’s speedy filming style, as the film took five years for him to complete the script, two years for pre-production, and eight months to film.  Starring Louis Koo (古天樂), Miriam Yeung (楊千嬅), Gigi Leung (梁詠琪), Carrie Ng (吳家麗) and Eric Tsang (曾志偉), the film will open in May.

Tang Bik Chi (Miriam Yeung) and younger brother, Tang Wai Tou (Louis Koo) each carry their own emotional baggage. Bik Chi had committed an act that greatly hurt and angered her mother. Even after her mother’s death, Bik Chi could not forgive herself and carried the guilt for years.  Although Wai Tou appears to have the perfect marriage with his wife (Gigi Leung), he secretly suspects that their daughter was conceived by another man.

Louis and Gigi also have their share of kissing and bed scenes. Wearing a monokini in a swimming pool scene, Gigi’s figure appeared to be surprisingly voluptuous. Gigi laughed over the effects, “The director is good! You ask [Pang Ho Cheung] why it’s like that. I can’t reveal any spoilers.”