Nicholas Tse on Marriage: “It’s the Beginning of Hardship” 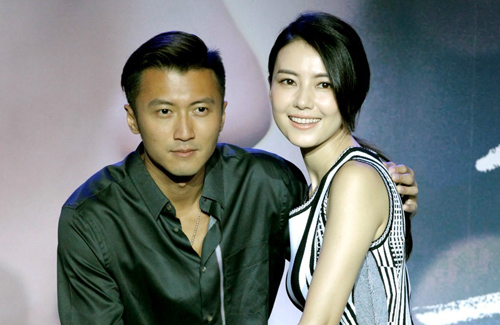 Director Zou Xian’s (鄒佡) latest romantic film But Always <一生一世> held a press conference in Beijing on July 31. The Mandarin-language film, starring Nicholas Tse (謝霆鋒) and Gao Yuanyuan (高圓圓), is slated for a release in mainland China on September 5. Nicholas and Yuanyuan portray a pair of star-crossed lovers, whose fates are tested by time.

At the press conference, the promoters unveiled the final film poster, which features Yuanyuan and Nicholas embracing each other on New York’s Brooklyn Bridge. Nicholas said But Always is his first pure romance film and revealed that Yuanyuan was the reason why he agreed to star in the film, explaining that he feels his partnership with Yuanyuan is “absolutely right.”

Nicholas spent 20 days to lose additional weight and gain muscle mass for a topless scene. Yuanyuan said she was too shy to look at Nicholas when he revealed his six pack while filming an intimate scene. “Both of us were very nervous about the scene, and we need some red wine and music to relax us.”

When the topic of Yuanyuan’s marriage to Taiwanese actor Mark Chao (趙又廷) was brought up, Nicholas congratulated Yuanyuan and compared her to the film’s title, But Always. Nicholas, who went through a divorce with Cecilia Cheung (張栢芝), shared his perspective on love. “Many things have happened over the years. My views on love are very different now compared to when I was younger. I used to feel that I must possess it and embrace it, but now I think giving my blessings from afar are good enough.”

Nicholas sent his blessings to Yuanyuan and added, “The words ‘always and forever’ have just begun. The hardships have also just begun.”

With the Qixi Festival, also known as Chinese Valentine’s Day, coming this Saturday, Nicholas and Yuanyuan prepared a large gift card for the press conference. Yuanyuan also disclosed that she has already prepared something special for her husband, Mark.

6 comments to Nicholas Tse on Marriage: “It’s the Beginning of Hardship”