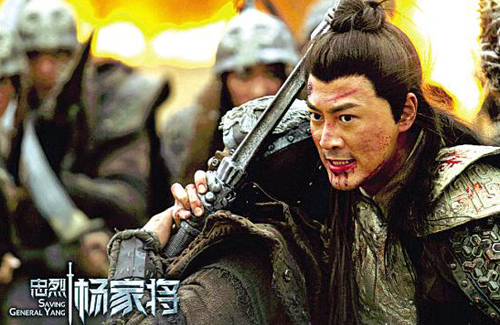 Despite the marketing buzz for period film, Saving General Yang <忠烈楊家將>, it has only received 56 million RMB at the mainland Chinese box office after its first week in cinemas. This is a far cry from other domestic movies such as Finding Mr. Right <北京遇上西雅圖>, The Chef, the Actor, the Scoundrel <廚子戲子痞子> and Drug War <毒战>. Could this be part of a larger trend marking the the end of period films’ popularity in mainland China?

Though the initial word-of-mouth was good, the earnings for Saving General Yang dwindled by the day, resulting in a dismal total gross. Beijing theater manager Wang Yan (王艳) said, “With such a strong cast, we had anticipated a great demand so we have arranged for several showtimes. When we discovered the lukewarm response, we reduced the number of showtimes and moved the shows to the smaller theaters.”

According to industry insiders, historical films such as Saving General Yang generally attract older viewers. Wang Yan elaborated, “Even though Saving General Yang may attract the older audience, they are not familiar with these Hong Kong actors so they will also not go see it.”

Unable to generate satisfactory box office results in its opening week, the number of theater showings for Saving General Yang will only decline and affect its total earnings performance.

Lack of Development and Strong Villains

Though the storyline of Saving General Yang is well known, it is still considered a classic so there will still be a market for it, according to movies market research expert, Jiang Yong (蒋勇). However, director Ronny Yu (于仁泰) did not have a thorough understanding of the Yang family and thus, failed to give an in-depth adaptation of the story.

The movie also lacks dramatic tension because of the absence of a strong villain. As a movie-goer said disappointingly, “The patriotic loyalty of the Yang family versus a fatuous monarch will make a compelling and touching patriotic story. However, this is not the case with Saving General Yang.” What was worse was the inconsequential reason the 7 Yang brothers went to war for. Instead of fighting for their country which would have made them loyal and noble, they went to war to save their father which greatly diminished the honor of the Yang brothers.

Another complaint was the weak relationships between the characters in the show. Without an in-depth look into the relationships between father and sons as well as among the brothers, the emotional arc comes across as lacking in substance. The audience was unable to empathize with the ancient notions of the past. With the lack of development in its storyline and characters, the use of a predominantly idol cast only further deemed the movie as being superficial.

In reality, period dramas and historical epics have been overdone in recent years. Other period film such as The Last Supper <王的盛宴> and The Guillotines < 血滴子> did not fare well at the Chinese box office either. With the recent disappointing period films released, the reputation of this genre was negatively impacted and make audiences wary from watching them.