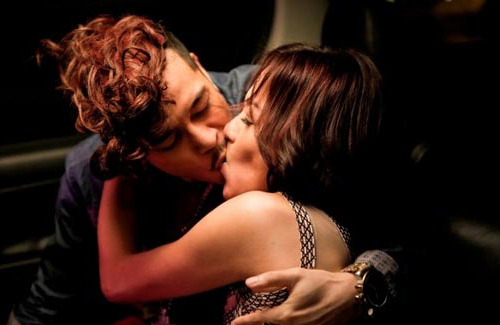 Director Daniel Chan (陳翊恆) expressed that there will be several major passionate scenes in the film, and that none of the major actors in the film had gone through such intense “love making” scenes before. He said, “It is a very daring subject to touch upon. The scenes were meant to showcase the world of a gangster’s love life.

“Oscar’s love making scene with the two actresses in the alleyway is to show how lustful his character is. Sammy and Winnie’s bed scene as well. Both Oscar and Sammy had to drink alcohol to get the job done. They had to feel slightly drunk in order to complete the filming process successfully. They are both very professional, and the outcome is terrific.”

Young and Dangerous: Reloaded, produced by Wong Jing (王晶) and Manfred Wong (文雋), is set to premiere on January 10, 2013 in Hong Kong.

Watch the Steamy Scenes in Action

35 comments to Steamy Make-out Scenes in “Young and Dangerous: Reloaded”