Trailer of Gillian Chung and Chilam Cheung’s “The Fox Lover” 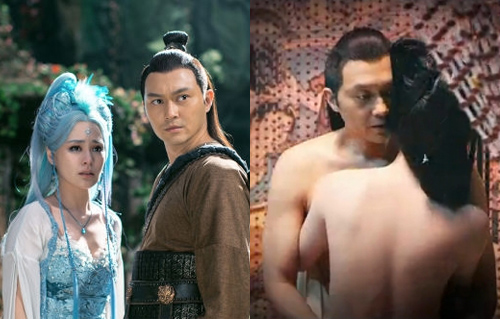 Adapted from a short story in Pu Songling’s (蒲松齡) supernatural classic Liaozhai Zhiyi <聊齋誌異>, The Fox Lover is about white fox spirit Xiaochui (Gillian Chung), who is irrevocably in love with the naive mortal Wang Yuanfeng (Chilam Cheung). In the universe resides the largest sea demon that strikes terror amongst the people.  Inside Wang’s soul, there is a hidden power able to destroy the fiercest demons. When Xiaochui’s loyalties are tested in the clash between humans and demons, she is willing to sacrifice her life for love.

When photo stills from The Fox Lover first emerged, netizens ridiculed the character designs, especially Gillian’s crop of blue hair, which was found to resemble the colorful hairstyles from anime, Sailor Moon. However, the hype and interest in the film increased after the trailer was released where Gillian was seen to be donning a rather revealing outfit. Her naked back scene sparked discussions as to whether Gillian had disrobed or used a stunt double to stand in for her.

The Fox Lover will be released on September 28, 2013 in mainland China.