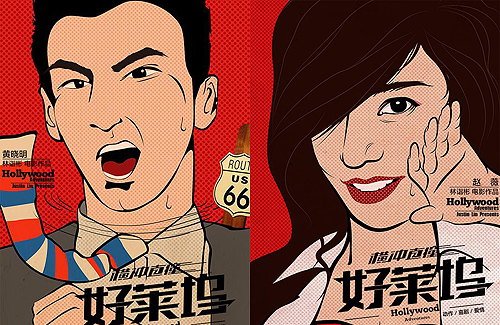 The film depicts a pair of friends, Huang Xiaoming and Tong Dawei, who visit Hollywood and subsequently become enamored with an irresistibly sexy woman, Vicki Zhao. The film will not be a conventional romantic comedy as director Justin Lin is best known for his work in the Fast and Furious film franchise, a multi-billion box office topper that features street racing and car heists. Justin naturally worked many action scenes into the story of Hollywood Adventures.

Another highlight of the film is that the cast will be portraying characters they have rarely, if ever, portrayed before.

In stark contrast to the village woman role she played in the Peter Chan‘s (陳可辛) film Dearest <亲爱的>, Vicki will portray a confident and sultry seductress, who dresses provocatively and speaks American-accented English. This is the first time Vicki has played such a sensual character.

Viewers can also look forward to the chemistry between Vicki and Xiaoming. In order to win Vicki’s heart, Xiaoming would have to go through gun fights and wild car rides. Xiaoming is determined to perform the stunts necessary for these scenes even though he was seriously injured from past filming projects.

Tong Dawei will provide ample comic relief to balance the romance and action in the film. Starring in mainly action films and tearjerkers in the past, venturing into comedy is also a first for Dawei.