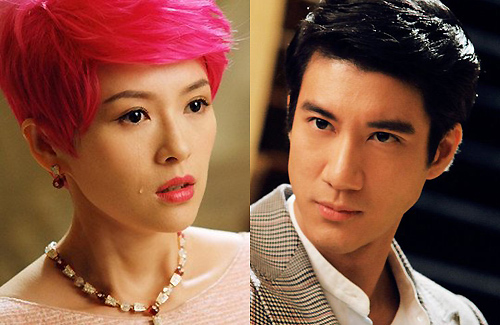 Starring Zhang Ziyi (章子怡) and Leehom Wang (王力宏), romantic comedy film My Lucky Star <非常幸运> is slated for a September 17, 2013 release in mainland China. Produced by Ziyi, My Lucky Star is directed by Dennie Gordon (Ally McBeal, What a Girl Wants) and serves as a prequel to Ziyi’s 2009 film, Sophie’s Revenge <非常完美>.

My Lucky Star follows the adventures of Sophie (Zhang Ziyi), an ordinary woman who gets caught up in an international heist expedition with a heroic spy (Leehom Wang). Yao Chen (姚晨), Ruby Lin (林心如), and Ada Choi (蔡少芬) also co-star in the film.

At the film’s Beijing press conference held earlier this week, Ziyi revealed that she was a “Leehom lover” and claimed that My Lucky Star was a movie tailor-made for Leehom. She said cheerfully, “Leehom is nearly perfect. I have many female friends who really like him, myself included. The reason why I filmed My Lucky Star was to help cure all the fellow Leehom lovers out there from their ‘Leehom disease’!”

Yu Dong (于冬), CEO of the film’s distribution company Polybona Films, said, “For Leehom, [Ziyi] really became a super woman. She took the roles as executive producer, producer, and lead star. She worked really hard, so she could get everything settled before Leehom joined the crew. Once Leehom came, he started filming right away. She was especially professional.”

Ziyi laughed, “As a Leehom lover myself, I have the responsibility to shoot a movie that shows the best side of him. If this movie is able to have everyone in the cinemas to fawn over Leehom, to help relieve their ‘Leehom disease’, then I will be very satisfied!”

Due to his filming commitments with Michael Mann’s thriller Cyber, Leehom was unable to attend Beijing’s press conference. Ziyi promised that Leehom will attend the film’s future promotions.

My Lucky Star’s theme song “Love a Little” <爱一点>, performed by Leehom and Ziyi, was released on September 6.