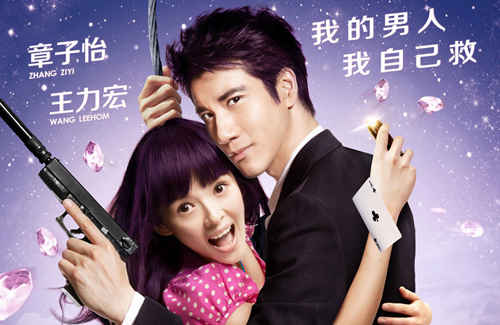 Stepping back into the producer role, Zhang Ziyi (章子怡) will return this summer with the release of My Lucky Star <非常幸运>, the second installment to her 2009 blockbuster hit, Sophie’s Revenge <非常完美>. Ziyi also stars in the film, reprising her role as the daydreaming Sophie in the romantic comedy.

In May, Ziyi released the first teaser poster of My Lucky Star, which is directed by Dennie Gordon and distributed by Bona Film Group. The poster features Ziyi hanging onto her “dream lover,” David (Leehom Wang王力宏), as he swings over the evening landscape of Macau. The tagline read, “I will save my own man.” The first set of movie stills and behind-the-scene photos were also released.

Ziyi expressed her confidence in the box office for My Lucky Star, stating, “It’s a romance that crosses different cultures and worlds. It’s going to be an adventure of a lifetime.”

Providing a fresh new take on the Sophie series, My Lucky Star had location filming at several world cities, including Beijing, Hong Kong, Singapore, Macau, and other fashionable European cities.

In related news, it has been reported that Leehom and his Lust, Caution <色戒> costar, Tang Wei (湯唯), will star in Michael Mann’s new untitled cyber thriller. Leehom and Tang Wei will play a brother-sister duo who will team up with Thor star Chris Hemsworth to tackle cyber theft and attacks.

The film will begin shooting in June 2013, and will shoot at locations such as Los Angeles and Hong Kong.