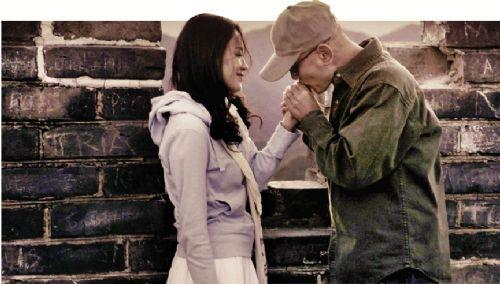 Caption: Qin Fen (Ge You) proposes to Xiaoxiao (Shu Qi) at the Great Wall of China in “If You Are the One 2.”

Director Feng Xiaogang’s new romantic comedy, If You Are the One 2<非誠勿擾 2> will be released on December 24th in North America. This marks the first time a Chinese film is released almost simultaneously in North America as its home release in China.  Starring Ge You and Shu Qi, If You Are the One 2 is the highly anticipated sequel to the 2008 award-winning film bearing the same title which set box office records in China.

In the first film, If You Are the One, Qin Fen (Ge You) was a successful entrepreneur who returned to China looking for a wife. Through an online dating ad, Fen stumbled upon flight attendant, Liang Xiaoxiao (Shu Qi). The pair became an odd couple and forged a deep emotional connection. Presented in Feng’s trademark humorous style, If You Are the One 2 follows the romantic tribulations faced by Qin Fen and Xiaoxiao. Due to their frequent quarrels and conflicting views on marriage, Qin Fen and Xiaoxiao agree on a “trial marriage” to test their love for each other.

As the first Chinese director to accumulate $1 billion Yuan in aggregate box office sales in China, Feng Xiaogang’s observational comedies have thoroughly captured worldwide audiences. Feng also directed the highly successful Aftershock<唐山大地震>, which was the highest grossing home-produced film of all time in China. Aftershock has been selected as China’s entry for Best Foreign Language Film in the 83rd Academy Awards.

If You Are the One 2 is the second film released by China Lion Film Distribution in North America, who also handled this summer’s release of Aftershock.  If You Are the One 2 will be shown in twenty AMC and Cineplex theaters in North American cities, including New York, Los Angeles, San Francisco, Boston, Washington, DC, Toronto, Vancouver and Ottawa. For a full list of theaters, please visit:
www.chinalionentertainment.com/ifyouaretheone2 TAGS: Feng Xiaogang, Ge You, If You Are the One 2, Shu Qi