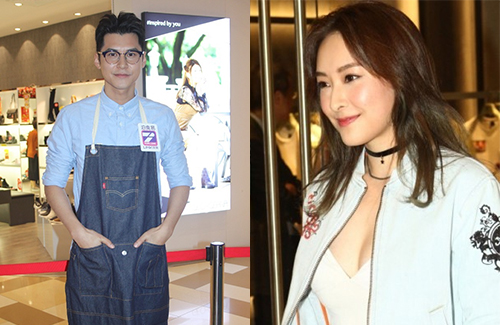 At a public event held yesterday, Carlos Chan (陳家樂) was bombarded with questions about his rumored girlfriend Jeannie Chan (陳瀅), whom he was spotted with in Tokyo, Japan earlier this month. It’s been said that the ICAC Investigators 2019 <廉政行動 2019> costars spent three nights together in Tokyo, putting it as quite the romantic trip.

But Carlos has denied the trip to be a romantic one, and continues to deny dating Jeannie.

“In December I was shooting three different programs,” he said. “It was crazy. I haven’t done something like that before and I never took a single day off. That’s why I decided to go to Japan with my colleagues. (With only Jeannie?) I was the only one at the airport. (An eyewitness said you guys were there together for three nights.) I haven’t read that report, so I have no comment.”

Asking if the lack of photo evidence was the reason Carlos continues to deny their relationship, he said, “I just don’t want to respond to such rumors. I want to focus on my career. (Someone said they saw you riding a taxi to Jeannie Chan’s house.) Objectively speaking I was changing cars. Nothing strange about that.”

Though he insisted that he is only good friends with Jeannie, reporters continued to press on for more reveals. “We’re really not dating now. (What about later?) I don’t know how to answer that,” said Carlos.

As for the possibility of dating Jeannie in the future, Carlos said, “I really don’t know how to handle relationships outside of my friends. Let’s just be friends first.” Pointing out that his ex-girlfriend Jennifer Yu (余香凝) is in a new relationship, he said, “I’m happy that she’s happy. I’ve been busy with my own things recently. Haven’t been catching up [to her news].”