Scheduled to take over from The Linewatchers <把關者們>, the medical series is one of the most anticipated productions of the year, with a noteworthy cast and six key highlights:

Leaving TVB for three years, Kevin Cheng took on the project in a freelance capacity, while it is also his first-ever doctor role. He will have scenes opposite another Best Actor winner – Kenneth Ma, who plays a pediatrician with an IQ of 160, who has an ambivalent character. Watch out for the sparks between the two, who are good friends in real life.

Having relocated to Vancouver after marriage, Linda will also be back after three years of absence, portraying an independent and courageous pediatrician. Viewers can look forward to her fresh pair-up with Kevin as the two will have a romantic arc. Since the actress is now a mother of two herself, we sure hope she turns up a more heartfelt, authentic performance as she cares for young patients onscreen.

3. Catherine Chau Is In It Too!

After clinching a Best Supporting Actress nomination at Hong Kong Film Award for her role in Project Gutenberg (無雙), Catherine finally gained recognition after years of acting. It has been eight years since her last drama at TVB.

Helmed by Forensic Heroes VI <法證先鋒IV> producer Ben Fong (方俊華), this is the first pediatrics-themed drama. The child stars featured are all full of innocence, while sick children with various ailments will bring out touching plot developments that tug at heartstrings.

With the help of professional doctors during the filming process, special attention was paid to the details of the operating theater and emergency scenes. Hospital beds and operating rooms were also accurately rendered to make everything appear as realistic as possible. 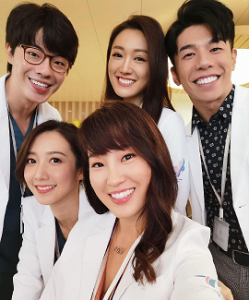 In the drama, Him Law, Mimi Kung (龔慈恩), Florence Kwok (郭少芸), and Gabriel Harrison (海俊傑) portray medical professionals. New dad Him turns up a more layered performance in his role as the son of dean of the medical academy (Mimi Kung). Hope, expectations, and conflict will all be part of mother-son pair’s relationship, giving viewers much to anticipate! A team of up-and-coming actors, including Arnold Kwok (郭子豪), Regina Ho (何依婷) and Bowie Cheung (張寶兒) will also be part of the cast, giving viewers more to look forward to onscreen.