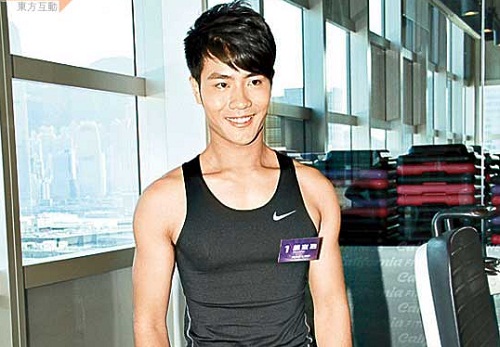 The twelve contestants of the 2011 Mr. Hong Kong contest appeared at a Tsim Sha Tsui event yesterday. With the nickname of “Chest God,” contestant #1 Edmond Siu (蕭家浩) talked nonstop in his self-introduction. Contestant #12 Hugo Lam (林志勇) constantly saluted the press as if he were a law enforcement staff. The atmosphere was quite humorous.

Appearing in Category III film 3D Sex and Zen <3D肉蒲團> Edmond Siu said, “I am a little bit nervous.” (You cursed in the soft-porn film?) “I was not swearing while filming. Perhaps they dubbed my lines afterwards. I have not watched this film yet.”

As the oldest contestant, 31-year-old Hugo Lam said, “I ran from Tuen Mun to Tsing Yi before. I will not lose in stamina in comparison to other contestants.”

Contestant #10, Clayton Li (李晉強), explained that he fell while crossing the street, injuring his nose and mouth. A scar was still present on his mouth yesterday. Next time, I will be more careful.” (It is very dangerous to cross the street carelessly!) “I will not do it again next time.” Jayne: I found Edmond Siu to be one of the better looking Mr. Hong Kong contestants! Aiya, he participated in 3D Sex and Zen and claimed he never watched the film himself? I wonder if he had any significant screen time? If a Miss Hong Kong participant had a role in the film, even if she kept all her clothes on, her chances would be over!