Shaun Tam is Big Winner of the Night

Big winner Shaun was on the verge of tears when he accepted his award, as he took a deep breath and bowed to everyone in gratitude before thanking all the senior executives including Virginia Lok (樂易玲), Eric Tsang (曾志偉), and Catherine Tsang (曾勵珍). He apologized to his parents for being unable to call them often while thanking them for their never-ending support.

As the son of Ti Lung (狄龍), Shaun once shared that his father would not praise him even if he were to win an award, but many believe his father who came to witness his victory is surely proud of him. The actor continued, “I love you all a lot, including my wife, who is my everything. I wouldn’t be able to win this award without you, so thank you, I will never forget my original intentions!” Shaun felt even more emotional as the day also marked his seventh marriage anniversary.

Rosina, who was recognized for her revealing performance in Battle of the Seven Sisters, finally made a breakthrough after years of hardships and criticisms. While accepting the award, Rosina cried when her name was called. “Since enrolling into the Central Academy of Drama in 2004, I have filmed endlessly until the awards today. Many people say that it takes 10 years of hard work just for one minute on stage, but it took me 17 years because of my poor qualifications. I remember on my first day of classes, my teacher said that in order to learn how to act, I have to learn how to become a human. Focusing on your original intentions is what kept me striving throughout these years, and I’m so glad I didn’t give up.”

The 34-year-old also expressed that her mother did not approve of Rosina’s choice to become an actress at first, so Rosina is happy to prove she could do it.

Linda Chung (鍾嘉欣) made her long-awaited comeback after three years with medical drama Kids’ Lives Matter <星空下的仁醫>. She was the favorite to win Best Actress, and many had high expectations since Linda also attended the ceremony.

In the industry for 17 years, Linda has been nominated for Best Actress numerous times, but has never won the award. Missing out again this year, Linda won Malaysia’s Most Favorite TVB Actress award. Upon her second time winning the award, she expressed, “I am thankful of all the love and support from my fans in Malaysia. Honestly, I am happy about winning any award, and I consider TVB as a school I really like and grateful for because they gave me my name.” 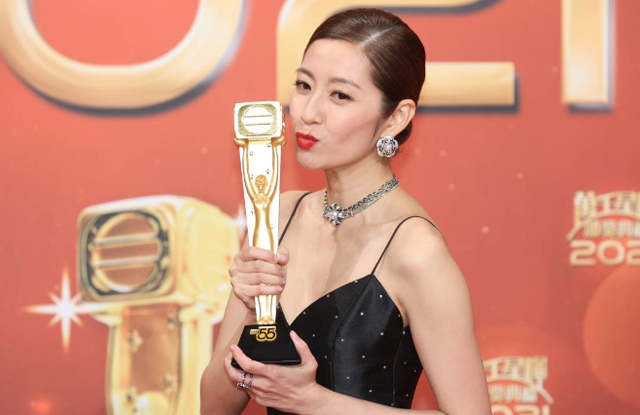