Adia Chan and Kaman Wong Are as Close as Family 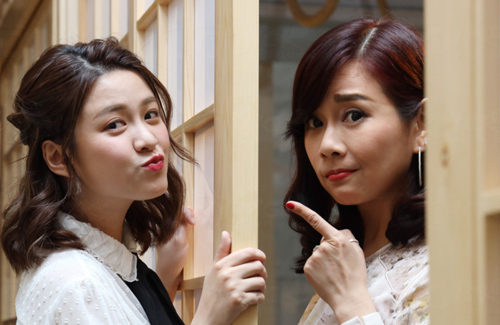 In TVB drama The Ghetto-Fabulous Lady <褔爾摩師奶>, Kaman Kong (江嘉敏) suffers from amnesia after the tragic death of her mother. As a result, Adia Chan (陳松伶) becomes her adoptive mother and the two develop an inseparable bond.

Off-screen, Karman and Adia’s friendship is just as close and the two already treat each other as family.

Adia as a Motherly Figure

Developing a close bond during filming, the two actresses are comfortable with sharing life advice. Kaman deeply remembers an advice that Adia once shared, “Outside of work, women need to learn to take care of their bodies. The most important thing is finding someone who will cherish and love you.”

Like a mother, Adia watches out for Kaman and has her best interest in mind. In October 2018, Adia immediately contacted Kaman after she found out that she was dating Anthony, a high-level executive at an electronic company. Sharing what happened, Kaman said, “Adia texted me on the phone and said, ‘Daughter, are you dating someone? Is the man a good person?’ At that time, I told Adia that I was planning to introduce him to her so she can help me check.”

Adia didn’t have to worry about Kaman’s new relationship for long. Kaman explained that although Anthony travels often for work, he would take the initiative to share his day with Kaman so she has no reason to be suspicious and worry.

“Love Must Be Proven By Actions”

Adia’s wisdom on love comes from her personal experience. In 2006, then 35-year-old Adia met 27-year-old Mainland Chinese actor Zhang Duo (張鐸). Reflecting on their relationship, Adia said, “I was hesitant of the age gap because of my traditional thinking and personal bias. However the surrounding factors didn’t influence me because my husband was able to prove himself with his actions.”

The couple eventually married in 2011 but their relationship required a lot of work. Due to work commitments, they worked in different cities and did not contact each other for a month.

Adia feels that their relationship works because they have trust and communication, “The most important thing for a couple to have is honesty, and at the same time don’t let the negativity grow. You have the power to choose. If you choose to go down the path of suspicion, life will only become negative. However, when you choose to believe, you will find that there is more chemistry between each other. Even if a day goes on with no contact, there is nothing to worry about. When two people decide to be together, it is required to have communication and be considerate of each other.”

With a well-established career and a strong relationship, Adia appears to have everything she wants in her life. However, she confessed that she has an unaccomplished goal: having children. “Actually we are trying and haven’t given up yet. However, I believe in fate and have my family by my side. I’m scared of not spending enough time with them.”