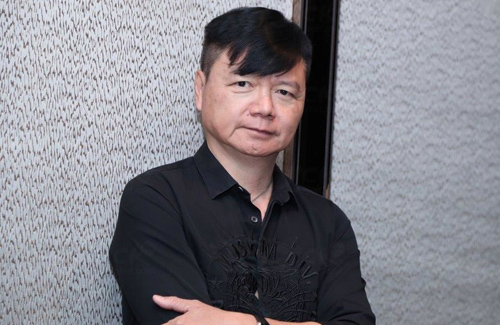 Actor Ai Wai (also known as Wilson Tsui 艾威) has been filming for ViuTV’s new reality show Midlife Crisis <中佬唔易做>, which places actors in everyday jobs to experience hardships firsthand. Sent to work at a Shell gas station, Ai Wai adapted quickly and did not find the work to be difficult. He joked that the crew should let him try a billionaire’s life next time!

At the gas station, Ai Wai’s duties include helping customers fill up their tanks, vacuuming and waxing cars, and assisting in the attached convenience store. This particular gas station has a lot of services compared to others, and the convenience store is like a mini supermarket as there are many things to buy.

From this experience, Ai Wai realized that he has a knack for sales, “Once there was a lady who came to shop for a party that she was hosting. I advised her on what to buy, but she realized that she didn’t have enough money during checkout. My colleagues and I helped go through the items. I had a sense of satisfaction because we helped a client who only had $300 Hong Kong dollars buy HK$500 worth of items!”

Devises His Own Meal Plan

When working at Shell, Ai Wai was only given half an hour for lunch, which was not enough time to go outside to buy lunch. For convenience, he brought a simple lunch to work. At home, he follows a disciplined meal plan. “I’ve lost weight and feel more energetic. I made the meal plan myself. According to logic, you do not need as much energy during dinnertime so I don’t eat meat then. If you eat meat there is no time to digest it, so it accumulates into fat.”

Ai Wai now eats three meals a day. His breakfast consists of two eggs and a bowl of oatmeal. For lunch, he has meat and vegetables. For dinner, he eats legume-based products. For example, he would eat three pieces of tofu but not meat.

After 41 years in the industry, Ai Wai concluded that “acting can easily make you into a selfish person. Everything is centered upon yourself. You will focus on your hairstyle, makeup, costume, and performance. During playback, you will only focus on watching yourself. All these small habits will accumulate and make you into an egocentric person.”

In order to constantly remind himself that he needs to look beyond himself and help others, Ai Wai currently sponsors 28 children.  “It costs around HK$4,000 each month and is deducted from your credit card. You don’t need to hand over a sum of cash every month and by using a credit card, it makes parting with your money much easier. If you can use your credit card for a meal, why not use it for charitable acts? It’s like paying your energy bill.”

Life is enriched by self awareness, and Ai Wai is happy that his contributions can be life-changing for others.  Even during periods of financial difficulty, Ai Wai never thought of giving up on his sponsorship. Every time he sees the photos that his “children” send him, he feels that even if he has no accomplishments in life, at least he is able to support many children.

Ai Wai on Working with TVB: “It Felt Like a Prison”