On January 27th, the Taiwanese actress happily celebrated her 43rd with close friends and family, including her husband Wallace Huo (霍建華) and their 2-year-old daughter. What fans were most excited to see, however, was the appearance of Ruby’s old friend Alec Su (蘇有朋), her costar from 1998’s My Fair Princess <還珠格格>. 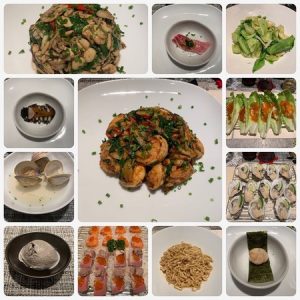 Ruby and Alec have maintained a close relationships in the past 20 years. On the day of her birthday Alec—who was working in China—flew all the way back to Taiwan to celebrate Ruby’s birthday. The actor also cooked up 11 dishes for Ruby, with seafood as the theme.

Ruby said on Weibo, “I am so touched! I can’t believe that I was able to finally taste Big Head Gege’s cooking for my birthday. We all ate happily, talked freely, and most importantly, we ended with a beautiful bowl of dried noodles. It was a perfect night, with great drinks, food, and friends.”