Filming for AI Rhapsody <智能愛(AI)人> may be Ali Lee‘s (李佳芯) greatest challenge to-date. She has portrayed many different characters before, but acting as an android requires her to forget her human characteristics and perfect the micro expressions. Tensing up her body to portray the rigidness of an android, Ali is often very sore after work and will stretch and have a hot bath to relax.

Her character also requires her to wear a pair of colored contacts for at least 12 hours of filming. Though her ophthalmologist advised she should not wear contacts because laser eye surgery had thinned out her cornea several years ago, Ali decided to take the risks to bring her character to life. Her eyes are often very tired and will tear up, so she will remove her contacts when she has a two to three hour break.

Filming a fight scene earlier where she stepped up to protect her owner Ram Chiang (蔣志光), Ali was able to fight off the attacker in a few swift moves. Though the results look good, Ali is still trying to figure out how to fight convincingly as an android and she felt extremely sore after work. 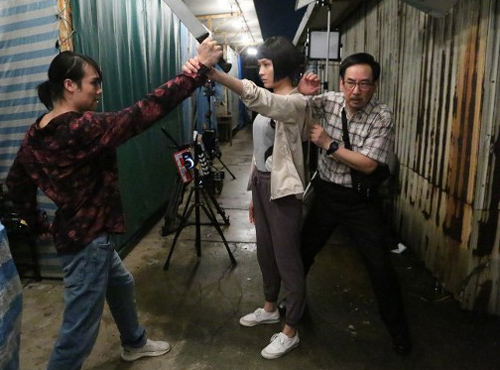