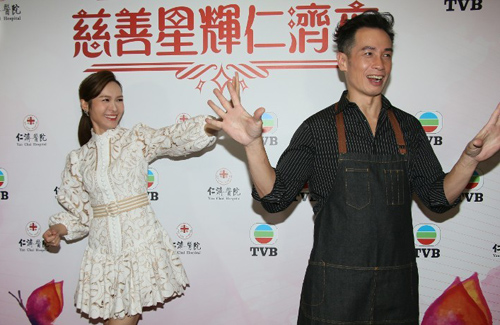 The actress denies reports of pulling a long face and said maybe she appears unhappy when not smiling.

Filming for Yan Chai Charity Show <慈善星輝仁濟夜> at TVB studio yesterday, Ali Lee (李佳芯) revealed that she will be adopting a half-hosting, half-acting style. Nervous about the live show segment, she said, “Filming dramas is not as scary as this, as I’m someone who goes blank or gets distracted easily. There’s a lot of dialogue, but luckily it’s everyday talk.”

Admitting she suffers from stage fright often, Ali admitted that she had wrongly said “World Cup” instead of “Olympics” once, and felt she should give herself less pressure in order to do better. Intending to depend on her partner Moses Chan (陳豪), Ali said he was nowhere to be found until right before the start of the show.

As Moses had just returned from Wuhan, China where there has been an outbreak of an unidentified viral pneumonia, Ali said, “He should quarantine himself at home first. If he has any signs of discomfort, I’ll cover his (duties)!”

Asked if she is afraid of getting infected, Ali, who saw Moses passing by, instantly replied in the affirmative. Posing for photos together later, Ali deliberately turned her back towards Moses, who then put his hand on her shoulder. Pleading in mock fear, she said, “I’m only here to do charity! Have mercy on me!”

Having ended her vacation, with time for what she wanted to do, Ali was asked about being spotted pulling a long face when out on the streets with boyfriend Danny Chan (陳炳銓). She said, “After the reports were out, many came to ask if I was unhappy and gave me encouragement. Maybe it’s because I look unhappy when I’m not smiling.”

Asked if Danny was at risk of getting fired from rival station ViuTV, Ali said that he was still going for meetings and should be alright. However, the two were always having conflicting schedules due to work, thus they would not always travel together and she would ask some friends to join her.