A pragmatic person, Ali enjoys thoughtful gestures from her boyfriend of five years.

Ali Lee (李佳芯), who has dated ViuTV host Danny Chan (陳炳銓) for close to five years, has few rumors with her male co-stars despite having worked with many of TVB’s actors.

Shares Her Philosophy in Love 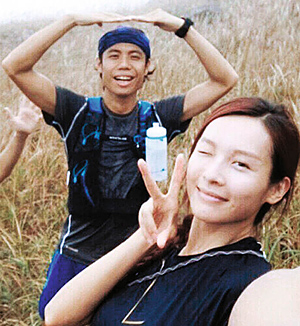 Despite admitting a soft spot for good looks, the 36-year-old actress prioritizes security over looks or wealth when it comes to her partner. She explains, “Maybe I’m not attractive enough. When I entered the industry I wasn’t young anymore, and I joined TVB just to film dramas and be an actress. I always put in my best efforts to do my job well and have no time to care about romances.”

Ali said, “Who doesn’t love handsome men! But I’m not ambitious when it comes to relationships and also lack confidence in them. I’d rather find someone who makes me feel assured and would give me stability, rather than go challenge myself with a so-called handsome or wealthy man, as I’d worry that my love life would be very tough.”

Dating Danny for close to five years, the two have faced many obstacles but share a stable relationship, though marriage is not yet in their plans. “Every woman will dream about getting married and having kids. But these few years I have less time to think about that, as work takes up too much time, and relationships do not always go according to how you plan it. My mom had me when she was 27 and I’m the third child in my family. I used to think that 28 is already a ripe age for marriage, and (wanted) to have kids by 30. But after passing that stage, I realized such plans are futile.”

Being an artiste means she naturally faces restrictions in her personal life, which is why she does not want to limit herself further by setting strict milestones by age. “Relationships don’t go according to plan, I’d rather leave it to fate.”

Timing Not Right for Marriage Now

Ali hopes that she and Danny can achieve greater stability career-wise before moving into marriage. “My career is going smoothly, but his is still on track. We had a consensus right from the start that we will prioritize our careers. I feel that the man has to achieve it first before we take the next step. Seeing things from his viewpoint – everyone wants a stable career and I feel that although his is moving at a slower pace, we are all making strides. If we talk too much (about marriage) it will give him pressure, so I rarely mention it.”

While stable, Ali admitted that their romance does get a little bland after years of dating, to the extent that she is not sure if marriage will happen. Though she might just get wed on a whim. “Relationships need to be maintained, even for couples who have been together for long. The element of fun and excitement is what puts the joy in our daily lives!” However, this is difficult due to her hectic work, which leaves her with little spare time to manage the relationship.

Luckily, Danny has not forgotten to express his love with sweet gestures, such as leaving Ali’s favorite foods in the fridge for her to enjoy after work, as she would often skip meals to focus on her job.