TVB will be airing Death by Zero <殺手> after Flying Tiger 2 <飛虎之雷霆極戰>, lifting the one-year ban that TVB had voluntarily put on the show after lead star Ali Lee (李佳芯) shared a pro-democracy post on social media.

Last summer, the TV Queen found that she was out of work after sharing a social media post that had incurred the backlash of many mainland citizens. Death by Zero, which was originally scheduled to be TVB’s 2019 anniversary drama, was pulled out of the broadcast list.

Now, nearly one year after the controversy, TVB has decided that it is finally time to lift the broadcast ban. The action comedy, which also stars Wayne Lai (黎耀祥) and Moses Chan (陳豪), will pick up the time slot currently occupied by the police drama Flying Tiger 2. Ali will be back to work to promote the series, which will premiere on June 29, 2020. 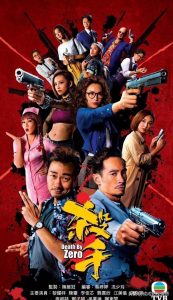 Ali has stayed quiet about the reports claiming that TVB had put her in the cold storage. However, she did admit that she was surprised about the backlash behind her social media post. The 37-year-old didn’t confirm the claims that she was dropped out of Legal Mavericks 2 <踩過界II>, Big White Duel 2 <白色強人II>, and Seven Princesses <七公主>, but she did say that she had no new schedules lined up for her after filming Amelia’s Rhapsody <愛美麗狂想曲> in October 2019.

During her period of no work, Ali fervently worked on her new book, which she plans to publish this summer. As for why it took a year for Death by Zero to be released, she said as actors she has no control over the company’s decision on when to broadcast its programs. She is unclear about whether or not TVB would reduce her screen time on the show, but she would do her best in promoting the series once it comes out.

Her costar Wayne Lai has offered his support for Ali. He praised Ali for being a hard worker and urged everyone to allow her more opportunities to showcase her talent. “As artistes our job is to provide entertainment to the audiences. When we complete a new project we all hope for it to be released for everyone to enjoy,” he said. Wayne refrained from commenting about Ali’s “sensitive” social media post, saying that he had “no idea” what even happened in the first place.

Playing an assassin in Death by Zero, Wayne is excited about the show’s upcoming broadcast. “This was the most action-packed role of my career,” he said. “It was a lot of work, but it was worth it.”

Death by Zero producer Joe Chan (陳維冠) was asked about the lifting of Ali’s soft ban. He said, “I don’t know anything about it, but I did receive news that the show will broadcast soon. The crew is very happy. We all worked hard, and we hope the viewers will enjoy.” He also denied reducing Ali’s screen time on the show and emphasized that she remains to be the show’s main female lead.

Ali Lee wants a lighter workload to lessen the stress on her body.

From scriptwriting to casting and helming the camera, Ali is taking on a challenging new project!